Last night was the season 10 Premier of the CW series Supernatural. Last season left us on a cliff hanger as Metatron stabbed Dean and fled before Sam. Castiel was growing weak without a grace of his own. Crowley was up to no good, Kevin Tran was dead, and Bobby was still dead. As Dean opened his eyes a demon, it looks like Sam will be on his own as we move forward. (spoiler alert)

If you have been watching the trailers leading up to this season you know this is “The year of the Deanmon”. Things teeter on the brink of this reality right from the start of the premier. It starts with Sam torturing a demon trying to track down his brother. She confirms that Dean is a demon. After that we flash back 4 weeks. Dean is on the road with Crowley living a life of debauchery, singing kareoke, hooking up with strange women, and staying drunking at all moments of everyday. Plus he’s killing people and demons every so often. Sam tags Castiel when he finds a lead on Dean, but turns away from using Cass on this one once it becomes apparent Cass is becoming worse.

This season may be the last season for the brothers. During the Supernatural Special on Monday there was a moment where the shows creators hinted it could go on for many more seasons. I like to hope so. Season 5 wrapped up and tied everything up all neat and tidy though, so sometimes it is a wonder they kept going. Jared Padalecki’s contract was up after 6 seasons and even he expressed that he may not sign up for any additional seasons if the show didn’t look like it was going anywhere back then. So it makes you wonder about the last 4 seasons and this new one. Are they going somewhere. Can they reach that epic armageddon-esque ending they achieved before.

The episode was alright for a start. I couldn’t tell exactly where the season wants to go and if they can somehow bring the last 4 seasons together in this one, Possibly final, season. It was definitely fun watching Dean rip through people without a care and live out his rotten dreamlife on the road with Crowley. The bromance between Dean and Crowley was also fun and that is one thing that makes this show great, it’s ability to play with nonsense amidst chaos. 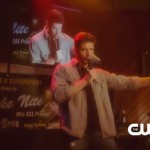 My only worry is that there is no clear vision at this point. What I’d like to see is Sam go to confront Dean who is full on Demon and unstopable with the first blade. He can’t stop Dean, so he turns to an old source of power, Lucifer. That could tie it back to the first half of the series. Maybe things spin out of control at that point, and finally God steps in (preferably played by James Earl Jones or something like that). I definitely want God to show up before the series ends. I suppose Death could step in and take Dean down. Who knows, I just couldn’t tell yet. If Dean doesn’t return to the light side before the series ends… it could actually be really great. So maybe that’s the route we’re on.

The bits with heaven and Cass are a little bit background noise right now. Cass is weak, and Metatron is in prison, while heaven is almost got it’s s*** together. They just need to straighten up all the picture frames and kill off the few angels who don’t want to come home. Cass needs to get his grace back of course but he’s been down and out every season since his premier in season 4.

I have high hopes as we start this TV season and Supernatural is one of the main  reasons why. The Winchester brothers and their car are some of the best characters on TV today. Misha Collins and Mark Sheperd really tie together the cast (you should follow Misha Collins on twitter, he’s hilarious). Too early to tell but they haven’t dissapointed yet.

As always feel free to disagree below or @werewolforigin on twitter