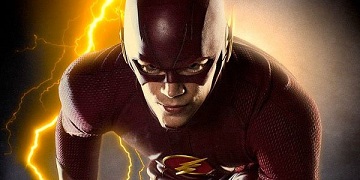 Tuesday night saw the premiere of the CW’s newest superhero drama, The Flash.  A spinoff of the successful Arrow series, The Flash (alongside the 10th season premiere of Supernatural) helped lead the CW to its highest rated night in four years.  Barry Allen’s character was introduced in Arrow in season 2 and immediately green-lit for a series of his own.  Grant Gustin plays Barry alongside a supporting cast that includes some well-known faces such as Danielle Panabaker and Tom Cavanagh.  I am not going to detail the plot of the entire premiere episode, however, there will be some spoilers to come.  You have been warned! 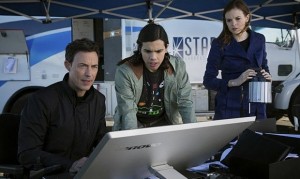 The pilot episode was everything a series premiere should be.  Flash’s origin story was re-told while still closely resembling the origin story of Barry Allen from the silver age DC comics.  They just decided to throw in an exploding particle accelerator this time to make it more current.  Barry wakes from a nine month coma inside STAR Labs to realize he’s gained some rather interesting powers.  He makes some friends, quickly finds at least one enemy, and takes a quick jog to Starling City to see an old pal.  I am a fan of Arrow, so when Barry speeds his way to Starling to meet with Oliver Queen on a rooftop, I was thrilled.  The scene may have seemed a bit cheesy, but I still couldn’t help but geek out a bit when Oliver leapt off the roof firing some sort of zip-line grappling arrow.  Barry just says “cool” and speeds off down the street, while Oliver watches the scarlet blur head off into the distance and utters a “cool” of his own.  It was probably my favorite moment of the show besides the scene showing a broken animal cage inside STAR Labs with a nameplate reading “Grood” hanging from it.  The Flash doesn’t have the same gritty darkness that Arrow possesses and Barry is much more of an underdog character than the skilled fighter and playboy Oliver Queen.  You can make your own determination based on that statement on whether you think this show is for you or not.  Although, if you are a comic book fan…you’ll probably want to see what I have to say next. 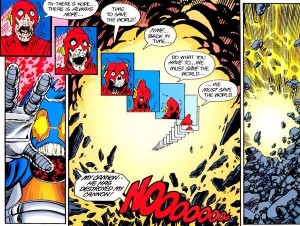 The multiverse.  It’s been around the DC comics for years and on numerous occasions DC has tried to clean up the continuity errors by publishing Crisis on Infinite Earths and Zero Hour.  Ultimately,  DC has embraced their multiverse by recreating it, albeit tidied up a bit, in the new DC 52.  Tuesday night’s premiere of The Flash hinted that the show may actually tackle, at least somewhat, the multiverse reality and Flash’s important role in Crisis on Infinite Earths.  I think this is fantastic!  If there is one thing better than a well-written superhero drama…it’s a well-written superhero TIME TRAVELLING drama!  Might we see an appearance by the one and only Booster Gold in the show?  It HAS been hinted at in interviews.  Could The Flash and Arrow become cannon alongside the big budget DC movies that are slated for release, just on different Earths?  It is entirely possible.  The multiverse sets DC apart from rival Marvel, who’s box office hits and TV shows cross over regularly with a very linear universe behind them.  I personally feel it is in DC’s best interest to embrace this aspect of their creations and run with it.  What do you think?  Hit up the comments section below or let me know on Twitter @SeanMLScott.  Until next time…Allons-y!