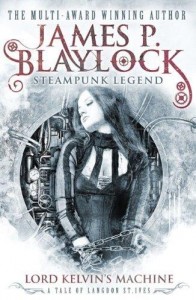 The hunchback doctor, Ignacio Narbondo, has murdered Alice, the wife of Langdon St. Ives. St. Ives must now steal a machine built by Lord Kelvin in order to save her.

For those of you who read my review of Homunculus, you know that I didn’t care for it. Well, I thought Lord Kelvin’s Machine was much better. My biggest problem with Homunculus was the over abundance of primary characters and the inconsistent feel of the story being told from so many viewpoints. That was not the case with this book. Lord Kelvin’s Machine does bring back many characters from Homunculus, but not all of them, thankfully. The story is only told from two viewpoints- those of Langdon St. Ives and Jack Owlesby. And each characters gets multiple chapters at a time, instead of 2 or 3 pages at a time, making the book so much easier to follow. The book deals with time travel. I love time travel and am always interested in how authors handle the issues and paradoxes of time travel. James P. Blaylock handles the issues of time travel well. I also grew quite fond of the characters in this book. When they are all given an adequate amount of attention, they are shown to be well-developed characters. I recommend this book to anyone who is fond of steam punk or time travel stories.

Rating: 4 out of 5 hunchback doctors

If you would like to buy Lord Kelvin’s Machine for yourself, you can do so here.

Titan books has also released a special limited edition version of The Aylesford Skull by James P. Blaylock which you can buy here.