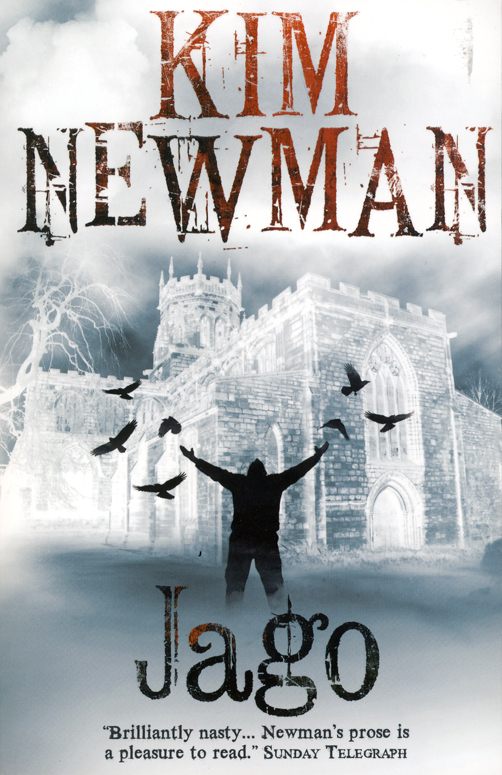 I know it has been some time since I have graced our readers with a review of a literary work.  I only wish my return was with something that I enjoyed a little bit more.  Jago is the re-release of Kim Newman’s 1991 horror novel.  To say that this book is intended for a mature audience is an understatement.  It is truly an unsettling account of what a megalomaniac with unchecked psychic powers can accomplish when the world turns up at his doorstep for a large festival rock concert.  Here is a brief synopsis from the publisher’s website…

Paul, a young academic composing a thesis about the end of the world, and his girlfriend Hazel, a potter, have come to the tiny English village of Alder for the summer. Their idea of a rural retreat gradually sours as the laws of nature begin to break down around them. The village, swollen by an annual rock festival of cataclysmic proportions, prepares to reap a harvest of horror.

Much like with Newman’s Anno Dracula series, (which I really enjoyed when reviewing it for the site) the prose is wonderful and Newman peppers the story with pop-culture references as usual.  Some of the scenes are so disturbingly graphic, however, that I wanted to put the book down.  To his credit, maybe this means Newman has done a remarkable job, and that truly good horror novels just aren’t my cup of tea.  Where my biggest complaint about the book comes into play is the length.  The book started out by grabbing my interest immediately and the climax kept me intrigued as to how this psychic madman would be thwarted.  However, the middle of the story felt as if it needed a major editing down.  This was one of Newman’s very first novels and this problem does not present itself in the Anno Dracula series.  Jago just felt like it was far longer than it needed to be.

Overall the book was well-written and truly disturbing, exactly what you should look for in a good horror novel.  Don’t let my personal unease with the graphic nature of some parts of the story deter you from reading something you may truly enjoy.  Be warned though, if anything, this will not be a quick read.

If you would like to purchase Jago you may do so here.

Jago was courtesy of Titan Publishing.