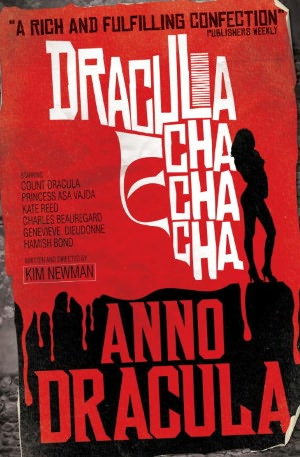 If you enjoy the vampire genre of storytelling, but are simply tired of reading about whiny, shiny, emo vampire teenagers, then the novel I’m reviewing this week is for you.  The third novel in a series, Anno Dracula 1959: Dracula Cha Cha Cha is a masterful reworking of the genre.  Kim Newman does a spectacular job of taking the vampire mythos and putting his own spin on it.  Something I believe is hard to do in a genre that has recently become saturated by less than spectacular works.  This novel was originally published in 1998, but I was graced with a copy of the re-release by Titan Books, which includes Newman’s brand new novella in the Anno Dracula series, Aquarius.  It is a historical fiction set in a world where the heroes of Bram Stoker’s novel failed in their attempt to thwart Dracula’s plans to conquer Great Britain.  This results in a world where the existence of vampires is well-known and increasingly more prevalent.  I read this book without having read any of the previous novels in the series, so do not feel pressured to start at the beginning.  Although, I’m sure Mr. Newman would love to sell a few more copies if you chose to do so.  Here is a brief synopsis of Dracula Cha Cha Cha directly from the publisher’s website…

Rome 1959 and Count Dracula is about to marry the Moldavian Princess Asa Vajda. Journalist Kate Reed flies into the city to visit the ailing Charles Beauregard and his vampire companion Geneviève. She finds herself caught up in the mystery of the Crimson Executioner who is bloodily dispatching vampire elders in the city. She is on his trail, as is the undead British secret agent, Bond.

If you have read any of my other book reviews here on 8daysageek, you should know by now that I am a fan of authors incorporating elements or characters from other works into their own stories.  After reading Dracula Cha Cha Cha, I am convinced that Kim Newman deserves to be crowned king of this storytelling feature.  Newman seamlessly weaves a historical fiction incorporating not only real-life historical figures, but also classic characters from film and literature.  Characters in the public domain are mentioned directly, while others such as the aforementioned secret agent, Bond, are discreetly altered in such ways as changing his first name to Hamish, which just happens to be the Scottish variation of the name James.  Alternatively, other characters and references are far more discreet or even obscure.  If I may put it in video game terms, this book is absolutely packed with Easter eggs for the discerning vampire aficionado.

Printed along with the re-release of the 1998 novel is Newman’s brand new novella, also centering on journalist Kate Reed, entitled Aquarius.  This story brings us forward to London during the psychedelic sixties.  Kate finds herself working alongside the police in the investigation of two girls found dead and drained of all blood.  She must balance her involvement in the case between the police, the secretive Diogenes club, and her own vampire heritage, to bring the murderer to justice.  Mr. Newman even tosses in a quick reference to a disappearing police box.  The moment I caught a Doctor Who reference, I became a Kim Newman fan for life.  The size of the novella is impressive in itself, consisting of over 130 pages.  This makes the re-release well worth its cover price.  I am not typically a huge fan of the horror genre in any form of media, but Newman takes the idea of vampires living among us and gives it a film noir twist with plenty of Fellini-esque imagery.  This makes for a wholly original and entertaining story for hardcore vampire geeks and newcomers alike.

You may purchase it on Amazon.com here.