America is an irradiated wasteland. 800 million people now live in the sprawling Mega City One, which lines the east coast stretching from Boston to Washington DC. In this city, Judges struggle to enforce the law and maintain what is left of humanity. 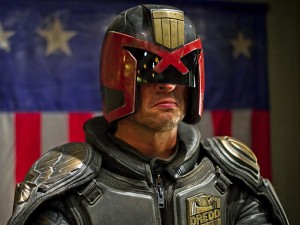 This new way of life is brutal and unforgiving, and that is precisely what this film is.

Mega City One is a character all its own, displaying its gritty, unrelenting realism and despair on screen any chance it gets. It kind of makes you wonder if surviving the fallout of war was even worth it. The characters in the film reflect this despair and visceral reality to perfection. Karl Urban is spectacular as Judge Dredd. He does not bend the law for anything or anybody, and shows a steel resolve in being the only thing that is upholding the law in Mega City One.

This is the Dredd that we have all deserved to see. The helmet does not come off, and there isn’t really any solid attempt to explore the motivations or emotions of the man behind the helmet. All you get is a stone cold peace officer that takes his duty seriously and displays his unwavering sense of justice without hesitation or regret. Olivia Thirlby is great as rookie Judge Cassandra Anderson. She does an excellent job of showing a bit of naivety on her first time out on the streets. But her character’s evolution from green rookie to capable Judge is natural and linear. Lena Heady is great as the drug dealing psychopath Mama. She played the character well, never going over the top with her performance. 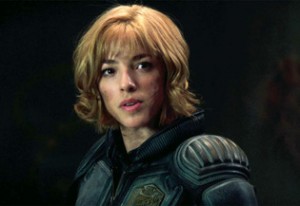 You are truly on edge when she is on screen, never quite sure how she is going to react to the situations she is in. Overall, Dredd is a well paced, beautiful film with fantastic imagery and cinematography. The action is brutal and gory, but never over the top enough for it to wonder into the ridiculous. The slow mo scenes are awesome! The performances are top notch, and I truly hope to see more of Karl Urban in the near future. I flat out loved this film, and I give it an 8/10.

I’m a lifelong comic book fan. Comics pulled me in at an early age, with influences ranging from Chris Claremont’s historic X-Men run, Walt Simonson’s Thor run, Mike Zeck’s run on The Punisher limited series, Jim Lee’s X-Men, the early 90’s X-Men animated series, and the best cartoon ever made, Batman: The Animated Series. As a kid, these comics and cartoons gave me a new world to go to when the real world wasn’t so nice. Because of this, comic books will always have a special place in my heart. I love everything about comics, and still get the same feeling reading them today as I did when I was a kid. My major in college was psychology, so I love to incorporate that into comics.
View all posts by Steven Brewer →
Tagged  2000 AD, dredd, Judge Dredd, Karl Urban, movie, review, Urban.
Bookmark the permalink.