I’ll say this; I’m not one for cutesy games. More often than not, the cute graphics tend to be a cover for poor gameplay. This was my thought process going into playing Air Penguin. However, I couldn’t be more wrong.

This is one of the most addictive mobile games I have ever played. The game is so simple, yet it can be challenging at times. It’s one of those games that you want to keep playing because you know that you can beat it, no matter how much you fail. The tilt mechanism of your phone is used and used well.

You have to tilt the phone to direct your penguin as you run and jump onto ice caps. The gameplay is extremely smooth and fun. The graphics are clean and colorful, making this game easy to continuously play for hours. There are also two different modes of gameplay and several special items that add to the replay factor.

The simplicity of this game, coupled with the awesome graphics and high replay value, put it on the top of the list of Android games. That says a lot because the Google Play store is riddled with games like this, so to stand out head and shoulders above the rest means you have put together an excellent game. 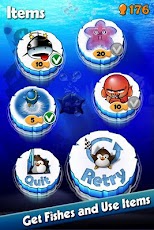 I’m a lifelong comic book fan. Comics pulled me in at an early age, with influences ranging from Chris Claremont’s historic X-Men run, Walt Simonson’s Thor run, Mike Zeck’s run on The Punisher limited series, Jim Lee’s X-Men, the early 90’s X-Men animated series, and the best cartoon ever made, Batman: The Animated Series. As a kid, these comics and cartoons gave me a new world to go to when the real world wasn’t so nice. Because of this, comic books will always have a special place in my heart. I love everything about comics, and still get the same feeling reading them today as I did when I was a kid. My major in college was psychology, so I love to incorporate that into comics.
View all posts by Steven Brewer →
Tagged  android, apps, Games, Google, google play.
Bookmark the permalink.