With Abraham Lincoln: Vampire Hunter being released in theaters, I decided I needed to add Seth Grahame-Smith new book Unholy Night to my reading list. 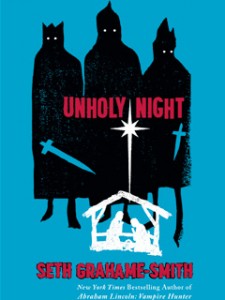 Here Smith takes on the challenge of revisiting one of the best-known stories, the Nativity Story.

They’re an iconic part of history’s most celebrated birth. But what do we really know about the Three Kings of the Nativity, besides the fact that they followed a star to Bethlehem bearing strange gifts? The Bible has little to say about this enigmatic trio…

In Grahame-Smith’s telling, the so-called “Three Wise Men” are infamous thieves, led by the dark, murderous Balthazar. After a daring escape from Herod’s prison, they stumble upon the famous manger and its newborn king. The last thing Balthazar needs is to be slowed down by young Joseph, Mary and their infant. But when Herod’s men begin to slaughter the first born in Judea, he has no choice but to help them escape to Egypt.

It’s the beginning of an adventure that will see them fight the last magical creatures of the Old Testament; cross paths with biblical figures like Pontius Pilate and John the Baptist; and finally deliver them to Egypt. It may just be the greatest story never told.

Before I started this book I had the concern that Grahame-Smith was going to take this story to a new level and really discredit religion.  But as a reader you believe that Mary and Joseph honestly think that their infant son is the “King of Jews” and the idea of their faith is never discredited.  Even the main character Balthazar who has his own personal problems with God, buts his beliefs on hold because he sees something special about this new infant. Or possibly he might just think the idea of killing all infant boys is a wrong idea (biblical times had some crazy theories on how to prevent political uprisings).

But the book isn’t about religion, the book is used as a way to add some action into a well-known story.  As a reader you enter the mind of Balthazar and witness fight scenes that are described in a very comic book way.  And you cheer on this criminal and want him to get away even if he does kill hundreds of Judea and Roman soldiers on his path to freedom.

Overall this book had everything I was looking for: a small amount of historical content, the personal thought of criminal, detailed fighting scenes, and did I mention crazy Old Testament magical creatures -can someone say Egyptian zombies.

you can purchase the book here