I spent this weekend at a castle in Muskogee, Oklahoma. It was my 10th year attending their annual Renaissance Fair but it was the 17th consecutive year of the festivities held at Muskogee’s famous castle. 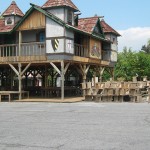 It was fun, like it always is. Every weekend in May they hold the event, full of jousts and knights, cosplay and shoppes selling all the old-timey wares a fool could want (I bought five gallons of homemade root beer). This is the only Ren Fair I’ve ever been to. There are dozens of Renaissance Festivals held across the US (and NOW is the season). Some are more authentic, focusing on historical accuracy, while others promote the fun side. Muskogee’s is the latter. Set on more than a few acres with a Castle as it’s centerpiece it is host to stores of artisans, games, events, shops, and food. 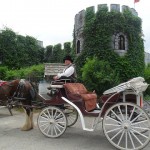 The last few years we always make our way through the event on “The Queen’s Quest”. The Queen has apparently lost her hair ribbons. You get the starting clue at the gate and follow each clue to the location of a ribbon and the following clue. Five ribbons/clues/locations later you are ready to be knighted or named a Lady of the Court (sadly by “you” I mean your children). Filling in for King Henry VIII for the first three weeks this year are visiting royalty from other locals around the world. My boys were knighted be the King of Spain (who looked a lot like Lord “Little Finger” Baelish from Game of Thrones).

Unfortunately, the cast member playing King Henry was away dealing with personal issues. Though we’ve seen him a billion times by now (and he’s knighted my kids before. My children are double knights).

We also caught the Birds of Prey show and watched two Jousting events (the bad knight is killed in a voilent and bloody display during the final Joust). Our quest to obtain the missing ribbons bought us through an enchanted Forrest with faeries and around the Maypole. We watched fire juggling and the Brothers Dimm do their mud show, which was more than a little adult. Funnel cake, dried jerky, root beer, and turkey legs later we were done questing and sun beat. It was one of the best years yet.

If you are in the mid-west anytime during the next four weeks this is one of the best geeking events you can catch. If you’re not near by , no worries, there are a slew of other fairs and festivals around the US (if your outside the US your out of luck this is a US thing. Maybe you can go ask your grandparents what the renaissance was like). http://en.wikipedia.org/wiki/Renaissance_fair follow the wiki link to the closest one and start your Summer off right. 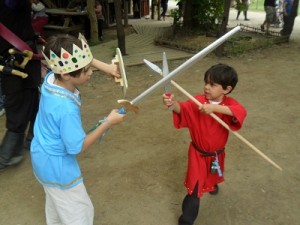