Bin Fodder: Fate of the Blade 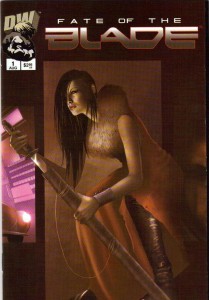 Welcome to this week’s edition of Bin Fodder.  My goal, each review, is to bring to light a book that I have particularly enjoyed and share it with the masses.  Initially my goal for Bin Fodder had been to review obscure or underappreciated books and for the most part I have tried to stay true to that.  Sometimes it’s devolved into just reviewing books I love for the pure enjoyment of showcasing their quality for everyone.  This week I return to the roots with a very under-the-radar comic.

One of the better, though short-lived, books produced by the now-defunct production house DreamWave was a book called Fate of the Blade.  The sleek, yet grimy style of art, really do a service to the tone of the book.  Clearly the writer and artistic team wanted to convey a bleak future where the seedy underbelly of society wields immense amounts of power.  But there is a beacon of light, of hope out there. 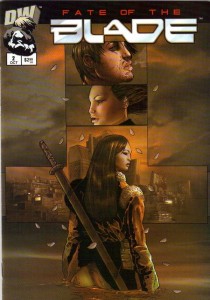 The company that will fulfill all your desires through the power of forced love.  Think Star Wars: The Clone Wars, except all the clones are hot chicks and instead of being loyal to the point of death, they’re sexually charged super-model-esque who can’t imagine a life without you.

Or at least that’s how it’s supposed to be.

Mya, infused with a love for her would-be suitor (owner) Victor, was destined for happiness.  But a year later, stuck under Victor’s overbearing and utterly controlling influence, Mya longs for a world outside the walls of her California Mansion (prison) home.

Introduce Lucy to the equation. 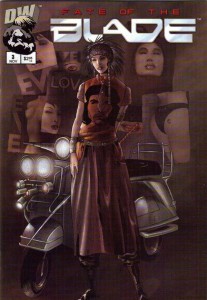 Lucy is also a product of Eve Incorporated, but she’s somehow managed to escape the influence of her programming.  It’s a part of the story that doesn’t get explored.  It’s possibly because she dies less than 10 pages after being introduced or maybe because it would ruin the allure of the character.

Her influence on Mya cannot be undervalued, though.  It is Lucy’s essence along with her rape and subsequent murder that starts Mya down the path of revenge, destruction and freedom.  Or at least it would potentially have done those things if the series hadn’t been cancelled after the 5th issue. 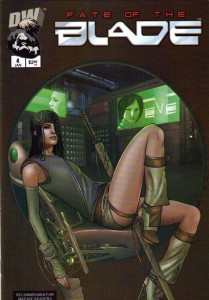 Good writers try to leave issue breaks on a cliffhanger to keep the audience coming back for more, and the end of issue 5 is a doozy.  Mya has just failed, for the second time, to exact revenge on the drug peddling, friend murdering monster, Tellie.  Two new, never before seen, characters are introduced speaking in grand overtures about plans yet to be undertaken in regards to Mya.

And that’s it.  Done.  We’re left to wonder where the story goes from there and yet this book is so unknown, so under-appreciated as to not even have its own page on Wikipedia that no fanfic would ever even exist for it.

I understand that this happens, both in comics and television  It just kinda sucks.  But, the ending (or lack thereof) doesn’t take away from the overall value of the story.  There are a lot of underlying threads involved and with it being such an incredibly fast-paced book I was very impressed with how well everything tied together. 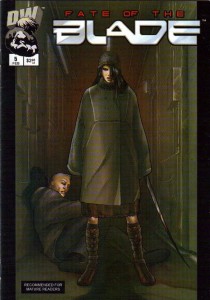 Fate of the Blade gets a solid A from this reviewer.  Though short of issues, it is a stout of heart story with impressive art.  The back issues can be picked up very cheap if you follow the link above or even check out the bins at your local comic shop; most if not all the issues will probably be sitting there collecting dust just waiting for some deserving reader to come along.

Check back next week when I take on another new title!