OFF THE RACK: Locke & Key Clockworks #3 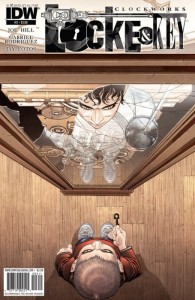 With such a vast variety of comics to choose from in today’s market, how you determine the right books to pick up is important.  OFF THE RACK exists to review one of the best books each week.  This week’s installment comes from the thriving independent publisher IDW Publishing called Locke & Key: Clockworks issue 3.

What initially drew me to the book was the cover: done by Gabriel Rodriguez.  It has a very interesting and creepy tone to it.  The old, interesting looking clock, is an integral part of the issue, which is a pleasant change from the usual striking covers.  Usually interesting covers lend nothing to the story (see my review of Godzilla a couple weeks back)

It’s not often that I have to admit this but, I was not familiar the existence of this title before today, or at least I had never paid attention to it in the past.  However, after reading the issue and finding the subject matter to be incredibly intriguing I was not at all surprised to find that it is a long ongoing series involving several volumes. 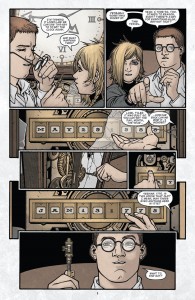 The current series, Clockworks seems to follow the Locke family and their time in Keyhouse (the locale).  In this issue the two older siblings have found the “Clock Key” which allows them to control the grandfather-style clock seen on the cover.  The clock itself possesses the ability to transport the user through time, with one interesting catch: all the numbers are adjustable down to the date, month, year but the main digit in the year is fixed with the number one.  Meaning, users cannot travel into the distant future or past, they are limited to the second millennia.

Clearly what was on the cover grabbed my attention, but once I opened the book and see Rodriguez’s colors and layouts, I was hooked.  Joe Hill does the writing and this is where I get a little put off by this issue.  I full accept the premise of the book and support the idea of what the overall story is focused on.  But, in this issue, the main characters are very over-the-top in their reactions to things they witness in the past. 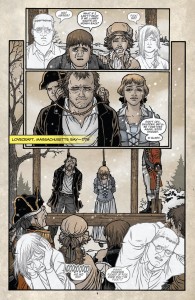 Now, I may be a desensitized jerk, but I don’t think I would completely lose my mind and scream the “F” work over and over if I saw someone hanged.  It was a common punishment in the 1700’s and it’s not nearly as gruesome as a firing squad or beheading.  So it strikes me as odd that these two people, who live in a magical house and have probably seen some truly amazing and strange things would go bonkers over seeing a couple hanged.

That being said, the plot of this issue was clearly a point A to B plot, keeping the overall story on track while throwing in some history and interesting (albeit a little confusing) back story.

Locke & Key: Clockworks issue 3 gets a B grade from me.  The art and style along with the overall story idea are great but the dialogue and some of the confusing back story brought the issue down in my opinion.

Hope you enjoyed this week’s OFF THE RACK.  Check back next week for an all new comic review!

Store Review:  As I do whenever I encounter a new shop that I pick up my weekly book at, I will review the store Locke & Key: Clockworks issue 3 was purchased at Got Comics, Inc. located in Glendale Heights, IL.  The location has a decent selection of back-issues covering Independent, DC and Marvel books.  A feature of the store are collected issue storylines conveniently packaged and price for the consumer looking for the entire run of a single story.  Got Comics also has an assortment of trade paperbacks with a discounted section as well.  The best part of the shop, from this reviewer’s perspective, is the design of the new released comics.  They are located on the main wall directly to the right of the entrance and all grouped together, rather than being spread throughout the wall.  This makes for a convenient viewing of what just came out.