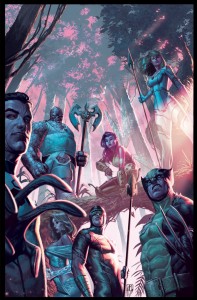 There are few books that remind me of my childhood as much as X-Men.  Whether it’s of the comics I spent so much time reading or the cartoon I watched with such vigilance.

My, how things have changed.

I was initially drawn to the issue because the cover is enticing.  It’s riddled with characters looking battle worn and ready for a fight.  Plus, the Thing is carrying a massive battle axe (which never appears in the issue, by the by). 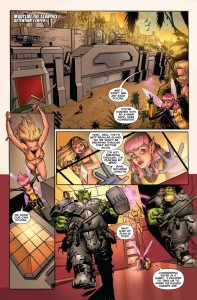 The internal art is solid, though several of the characters look very different than I remember, more on that later.  One thing I did notice, however, is the dramatic increase in the “sex appeal” of all the female characters in the book.  Granted the book is rated teen, but when I’ve been reading all the outrage about DC’s new designs, nobody was talking about Marvel’s loose women.

About the issue itself, first of all, the White Queen is a “good guy” now?  And, I knew she was always somewhat trampy, but they’ve made her insanely busty now.

Issue 19 of X-Men is the conclusion of an off-world story involving a mega team-up.  Joining noted X-men Wolverine and Cyclops are Fantastic four members: Thing, Mr. Fantastic and the Invisible Woman, as well as Dr. Doom and Magneto. 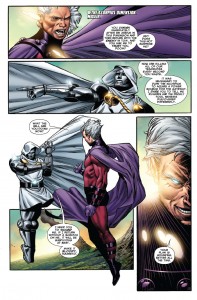 Sounds like an all-star lineup, right?  It could have been, but the issue seemed very clunky and too full to be enjoyable.  What this leads me to believe is that the previous issues of the storyline were too loose.

I was able to get a general sense of what the story was, why the characters were in this alternate reality and who was a good guy/bad guy.  But going back to my point about the issue being too full, the defeat of the villain, a villain who had thwarted them for many an issue, was defeated so easily it was ridiculous.  It was like one of those movies where they spent too much money on special effects and the ending makes no sense because it had to be rushed to completion. 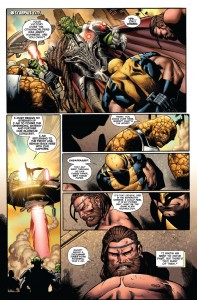 Overall X-Men gets a C grade from me.  Art was cool, but the story was lacking, a lot.

I hope you enjoyed this week’s OFF THE RACK.  Check back next week for an all-new review!