I guess I should let you know that I’m not a fan of war books, so I wasn’t expecting much. The components were all wrong for me, Sgt.Rock, a character I don’t care for, it was obviously a war story, and Ivan Brandon, although talented, had never done anything that stood out for me. I’m a grown man and I can admit my mistakes and I made a huge one. This book was amazing! 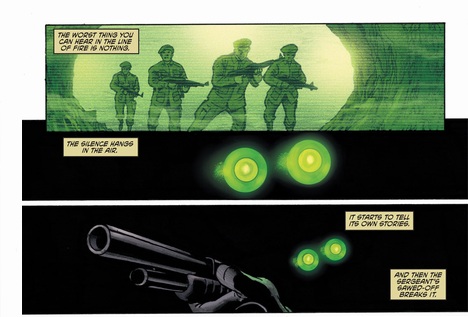 The captain was such a badass.

Tom Derenick has done a lot of stuff I like, mainly Shadowpact which was fantastic. The art was just the cherry on an awesome sundae of epicness! I was impressed by the very realistic dialogue and emotion by the military men of this book. I was expecting the same old military stuff you get from every war book out there, but then the big twist happened. Rock and his squad weren’t just playing soldier, they were against not just one, but two super powered advesaries that decimated his squad. Who were these mystery men? Why was the military sent to stop them? I can’t wait til the next issue to see more. 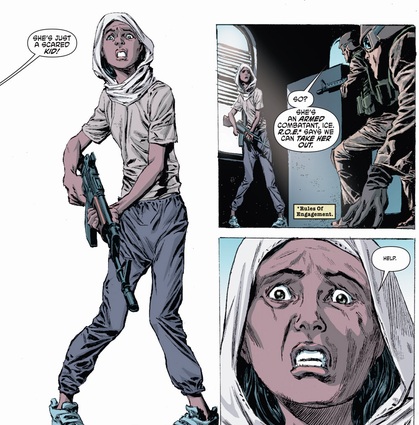 I really couldn’t give enough praise to this book, it has it’s bad side as well, mostly the backup story. I loved the main story and alone would recieve an ace, but I hate to rate this book as a whole.

I give this book a KING, It would get an ace if it weren’t for the slow and boring backup story. 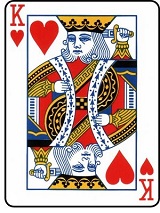 So where would the hooded woman be during war? right here. 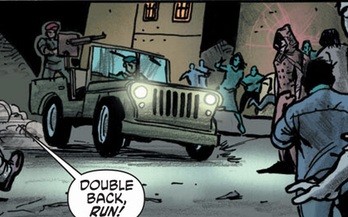 RUN! except you in the hood, you just stay there.

I'm one of the main contributors to 8 DAG and I take pride in my other job as Public/Staff relations. I'm a comics and movie junkie and I love to podcast. Follow me on Twitter @BrandoCop
View all posts by Brandon C. Williams →
Tagged  52 pickup, DC shuffle, Men of War, New 52, review: comic.
Bookmark the permalink.