The post Fear Itself Avengers line up was released revealing the new team and Hawkeyes new threads, hers the image. 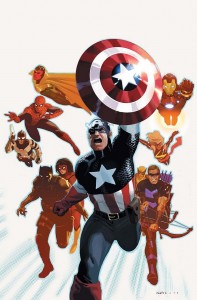 Okay first off, Hawkeye’s new costume is strange, I like the idea of making him look closer to the movie version, but I don’t know if it was necessary. Hawkeye, Iron Man, Steve returning as Cap, Black Panther (always good), Spider Woman (Rather this be Storm), Spiderman (I don’t think he needs to be on teams Replace him with Moon Knight), Wolverine (he REALLY doesn’t need to be on teams, except X-Men replace him with Beast), Vision (Always good), Ms. Marvel (good Thor replacement), and Noh-Var the new Captain Marvell (Avengers needs one or two new guys).

What do you think of this team? Whats your Dream Avengers team? Comment below.

I'm one of the main contributors to 8 DAG and I take pride in my other job as Public/Staff relations. I'm a comics and movie junkie and I love to podcast. Follow me on Twitter @BrandoCop
View all posts by Brandon C. Williams →
Tagged  avengers, Captain America, hawkeye, marvel, new, new costume, Spiderman, Wolverine.
Bookmark the permalink.