Interview With A Geek: Brimstone 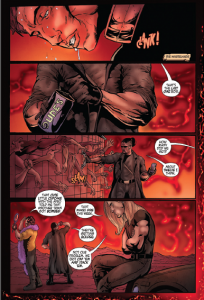 Interior art from Brimstone and the Borderhounds

This weekend at Wizard World Chicago I had the pleasure of meeting Brimstone and his colorful companions. Here’s the exciting interview.

You can learn more about Brimstone and all his endeavors at WWW.theborderhounds.com

Below is the plot given to us from the good people at TheBorderHounds.com

To many, Hell is a place of demons and fire. The place where all evil souls go to be tortured for the rest of eternity; and Heaven is the place where good people go to eat ice cream and float on clouds. Unfortunately, it’s all a load of crap. Hell is just a place in another reality, like Long Island but not as annoying. A floating hunk of existence filled with barren wastelands and a single major metropolis spanning 1,000 times the size of New York City. When you die, good or bad, you might come here. Turns out that the natural cycle of existence is to just bounce around realities after the physical vessel dies. Physics dictates that energy cannot be destroyed just changed, so we are born, we live, we die and we go to another reality. Whether Hell, Heaven, Nirvana, Hades, Elysium or any other; everyone that has ever died, ever, in any world in our universe goes somewhere. Those unlucky enough to surf the inter-dimensional nexus and end up in “Hell” are brought to a city where the gate reaches over a mile height, not to keep anyone out, but to keep everyone in. The powers that are have bought into the myth of Hell, and have created a large corporate empire for the sole purpose of obtaining the most precious commodity known, Souls. Souls that arrive (the ones that don’t get plucked by other competing corporate realities) are processed and sent to their containment facilities to be put into the Slave labor force. Just like any third world country on the closed border of better places, where there is only the rich elite and the extremely destitute (i.e. souls that end up there), there is a considerable black market operation for smuggling souls out of “Hell” and back to respective points of origin or to a higher paying competitor. Because of this, “Satan”(One of the original inhabitants of Hell, a former janitor, who has taken his position WAY too seriously), has created The Department for Retrieval and Prevention; a police unit to capture “Weepers” (named because most souls just moan and cry that they don’t belong there) and “Kittens” (natives of “Hell” who rebel and leave illegally because it’s “not cool”, “phony”, or “full of bad people”). Serving the offices of the DRP, are small independent units of free-lancers, known as Borderhounds. They patrol the borders, sit in their trucks and drink beer, occasional shoot something, and are tasked with picking up targets in the Wasteland or even our reality if they have escaped that far. Enter Brimstone, a Half-Demon/Half-Human son of a Janitor of Demonic Forces and a Saxon Princess from 312 A.D. With his hybrid make-up, Brim has always had an advantage over the full-blooded natives of hell. He can travel to our reality a lot simpler and he can hunt Weepers & Kittens like a bloodhound. His “Forza Infernis” (Strength of Hell) allows him to manipulate lesser beasts and be almost invulnerable (also giving him a higher alcohol tolerance). Brimstone is married with two kids and spends his days patrolling the border, drinking, and trying to get his wife to put out. He hates coming into our reality for retrieval or shopping because he doesn’t “get it”. He just likes to hang out in the wastelands with his staff, which consists of two huge Mexican brothers Dawg (the beer guzzler) & Luscious (who enjoys wearing feather boas and Elton John Sunglasses) who both share his affinity for alcohol and hunting. And so life goes on for Brimstone and his squad, catching Weepers and Kittens, dealing with his nagging wife, trying to get a beer, watch any old Wrestlemania tape in peace, and dealing with his tight-ass bosses in their world and ours. Unfortunately for this squad of border hounds, they have a lot to contend with, as well as competing with other Borderhound units constantly wanting to see them destroyed. New rival corporations are always trying to sabotage “Hell’s” work, and now factions of Weepers and Kittens are trying to bring the worst of their ranks into common reality in order to lure poor and unsuspecting Retrievers into the open. A type of Cold War Era, corporate espionage has emerged in “Hell” as well as other realities (where the sun doesn’t shine). Agents from all sides constantly war with each other trying to claim high-profile targets and destroy the others’ ability to function. Brimstone’s hybrid nature makes him a big target and a tough nut to crack, but he manages to kick ass with his “Taco Talent”, Dawg & Luscious. But within the shadows, forces are conspiring to bring about the destruction of the fabric of reality. And soon, Brimstone and his squad of Borderhounds will find themselves knee-deep in a plot to unravel the very fabric of existence itself with Brimstone as the key to saving or damning us all.

I'm one of the main contributors to 8 DAG and I take pride in my other job as Public/Staff relations. I'm a comics and movie junkie and I love to podcast. Follow me on Twitter @BrandoCop
View all posts by Brandon C. Williams →
Tagged  Brimstone, Brimstone and the borderhounds, comics, interview, wizard world.
Bookmark the permalink.