OFF THE RACK – Gladstone’s School for World Conquerors 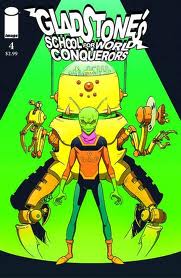 Maintaining my tendency to lean towards more independent books and companies I stumbled upon Gladstone’s School for World Conquerors issue 3, a book produced by Image Comics.  Gladstone’s is written by Mark Andrew Smith, a Harvey Award winner.  The cover and interior art is by Armand Villavert.

As I outlined last week I’m going to be exploring each week’s issue from several perspectives to try and gauge the total reader experience.

To start with, the cover is eye catching; Villavert does a good job of tantalizing the reader with a straightforward cover design.  As you can see, it prominently shows an alien, complete with antennae backed up by a hulking robot awash with sadistic looking devices.

Sadly, the robot does not exist beyond the cover, leaving us to wonder: did the story change from the point where cover concept art was approved or did the artist simply invent the robot for a more interesting cover?

While we are left to ponder that, I will take us inside the book itself.  For those of you who are familiar with the cartoon series for Teen Titans, you will feel right at home with Villavert’s artistic style as it is very reminiscent.  For those of you not familiar with the series, not only would I highly recommend checking it out, but click the link for a better idea of what I’m going to explain next. 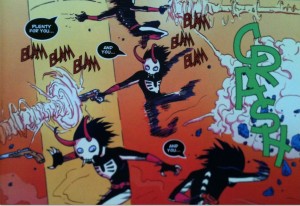 The style shows a Manga-influence but not to the point of being distracting.  The action sequences seem laid out much more like a cartoon (also reflecting the Titans influence) with the movement being more shadowed and scratched-out lines rather than minor action lines.

Now that I’ve established the visual reasons for deciding to review this book I want to delve into the actual story and writing of the issue.  Smith starts this issue off in the middle of an event, and as I mentioned last week I am very much a fan of doing this when the writer strives to have it make sense.

The main characters find themselves about to do battle as the issue opens.  It almost seems like there needed to be a page before page one.  Because the opening line is, “Ever get the feeling you’re being watched?” and we already see the creatures that are “watching” them, about to pounce.

The battle makes little sense to start with, but is explained away once the characters reach their destination, which happens to be the house of one of the characters, Mayet (Mummy Girl).  Apparently a study session is supposed to occur but all the characters, aside from Kid Nefarious and Mayet, appear to be doing…well, nothing, while these two characters review material.

It’s at this point in the issue where Smith gets a little preachy.  Not about religion, but about the value of comics.  Kid Nefarious stumbles upon one of Mayet’s comic books and, having never seen one before, immediately gets sucked in and starts reading it.  Mayet begins to extol the virtues of comics and their value as learning materials for schools as well as literary works while questioning the thinking of those in the education community who belittle or think poorly on the comics industry as having a value in the education field.

As a writer I tend to side with writers, but I also tend to think that, as the saying goes, “politics should stop at the water’s edge.”  Meaning, this isn’t a political book (by all accounts) and it’s not a literary graphic novel, so I don’t necessarily understand the use of two pages for a soapbox railing of the education system that is “blockading” the comic’s rise to prominence in classrooms across the country. 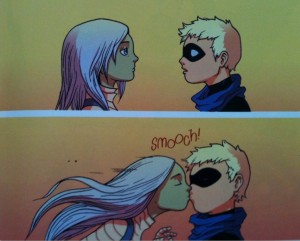 Non sequitur aside, the issue is a solid story.  It has an action sequence, character interaction and development, the beginnings of a love story and comics within comics.

Overall my rating for this book is a solid B-.  The cover is misleading, which I’m never a fan of and the rant about education versus comics is unnecessary for me, but the art inside is solid and I like the story overall.  I think that for a fourth issue it doesn’t lose you in the minutia of what may have come before and the characters aren’t so overdeveloped by this point that it’s impossible to get involved in the story.

Nice find, go pick it up!

I hope you enjoyed this week’s edition of OFF THE RACK.  Keep your eyes glued to 8daysageek for next week’s column!