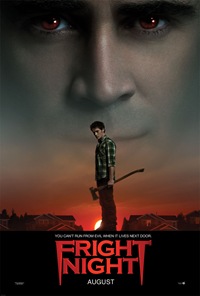 and funny and just suspenseful enough,

and the 3D is nicely used for the most part.

Let me start by saying I have not seen the original 1985 Fright Night, so this is based solely on this movie. I did not expect to enjoy it as much as I did, and yet I was very pleasantly surprised and want to go see it again. (A rarity for me.) The movie was shot in 3D and for the most part the shots were planned out very well. When I was handed the 3D glasses I was dreading a conversion, but fear not! 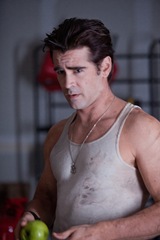 Basic premise: Ex-Nerd Charley (Anton Yelchin) and his mom (Toni Collette) get a new neighbor. The new neighbor, Jerry (Collin Farrell) is a little strange and pretty soon Charley (with some prompting by his friend Ed, Mintz-Plasse) is under the belief that their day-sleeping neighbor is a vampire. And, no surprise… he is!

Charley tries to enlist the help of Peter Vincent (David Tennant), a Las Vegas magician famous for his show “Fright Night” who claims to be a vampire hunter, and gets turned down. Charley and his girlfriend (Imogen Poots as Amy), and his mom, go on a quest to rid Las Vegas of this uber violent monster vampire and things get hairy. Fortunately for them, Dr. Who Peter finally joins the fight against Jerry. There are some very creative and fun action sequences, especially toward the end.

Collin Farrell revels in his role as the charming yet evil Jerry The Race Car Driver Vampire. He plays creepy to such an effect that I don’t know if I’ll ever look at that Irish face the same. David Tennant, as the absinthe swigging, leather pants wearing Peter Vincent is on par with the quality of his character. He starts out as a cocky, dismissive jerk that’s using a Las Vegas performer persona to hide his fear of the supernatural and finally evolves into someone who has mustered the courage to take action against it. 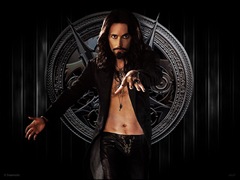 Like with any remake, they have to update dialogue and setting and character types. There’s a few jabs at pop culture vampires in there (most notably, Twilight) and a reference to Jaws that comes to fruition. It’s clever and funny when it wants to be, and scary when it wants to be, and downright sinister when it wants to be. Example: Jerry has a hidden room behind a closet full of fake uniforms to keep his victims in so he can feed on them over and over and over. Fright Night’s Jerry is a sociopathic monster that will stop at nothing to get what he wants and his actions do not show anything but extreme determination.

Chris Sarandon, the originally Jerry, has a cameo in the film. Some other actors worth mentioning that I recognized, which proves I watch too much television, is Dave Franco (Scrubs: Interns) and Reid Ewing (Modern Family). Some people might recognize Sandra Vergara and think, “where have I seen her?” Well, you’ve probably seen her sister, Sofia Vergara, and I’m in love with them both.

Give Fright Night a chance. If not in theaters, it is most definitely worth watching at home whenever it comes out. Because of Collin and David, I think I might be slowly falling in love with horror movies again.