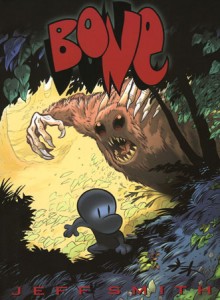 one of the best.

Bone is one of the most epic graphic novels ever written. Jeff Smith blends humor, action, fantasy, and emotion into a story that pulls at your heart and makes you really connect with the book. With Harry Potter ending we need another series to grasp on to. I see this movie as a mix of live action characters with CG characters. Movies like Garfield and Alvin an the Chipmunks have made this a joke. I think Rise of the Planet of the Apes and Lord of the Rings have shown that CG characters work.

The main character and all around good guy, Phone Bone is the quiet and at first easily spooked hero who is the purest of the Bone cousins. Elijah’s calm and meek voice is what I hear every time I read the series. 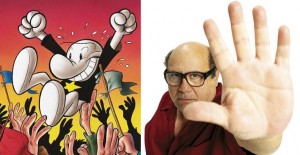 Phoney Bone is an angry, manipulative, and all around nasty guy. Deep down he’s really only looking out for his younger cousins. DeVitos voice is perfectly suited for the gruff and slimy Phoney.

I do miss the days of voice actors doing voice acting

Smiley is not the brightest Bone, but he has a huge heart and cares for both of his cousins greatly. Faggerbakke, who’s voice can be heard on SpongeBob as Patrick would be a perfect fit for Smiley. 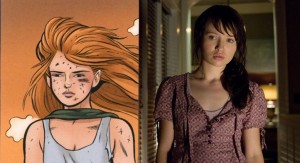 Thorn is the sweet and tough heroine. She has a great destiny and is at first reluctant to fight, as the series goes on we see much growth in her character. Emily Browning get’s a bad wrap, she just needs the right role to flourish, this should be it. 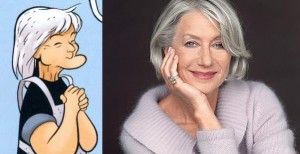 I can Helen Mirren beating down some rat creatures

G’ma Ben/Rose is Thorns grandmother and so much more powerful then she appears, She knows the secrets of the land and is overly protective of Thorn. Helen Mirren does old and tough with grace and a sense of beauty.

Lucius is big, tough, and incredibly charming. Lucius cares for Rose and Thorn as if they were his own and he gains a strange attachment to Phoney and Smiley. Michael Caine is tougher than people give him credit for. He is perfect for this role, even though I’m sure I will get some feedback.

...and on the day of the dragon, not a fuck was given.

The Great Red Dragon is immensely powerful and carries with him so many secrets. The Dragon is wise, yet his humor is apparent at all times. Patrick Stewart has one of the most epic voices ever, and he is immensely funny.

a Scottish bug, sounds cool to me

Ted is always there it seems, he is a small bug that always has the right information and the right directions, most of the time. Craig Fergusson’s voice is great, Ted really has no reason to voiced by him, I just like him. 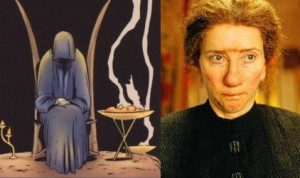 mostly voice work, but when she shows herself she's even creepier

The big bad guy at first, and I may be ruining a few things with this casting, but no actress handles heavy make up in such the way Emma Thompson does, that with her great acting will fit together perfectly in this role. 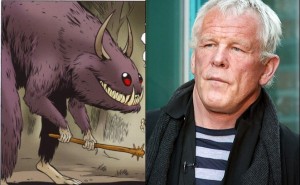 and he already kind of sounds like his tongue is gone

Kingdok is the evil lord of the rat creatures, and he is immensely evil, wanting to eat the animal orphans, the urge to kill all the flatlanders, and really just being a dick. Nolte has the gravely rough voice needed for such an evil role.

I'm one of the main contributors to 8 DAG and I take pride in my other job as Public/Staff relations. I'm a comics and movie junkie and I love to podcast. Follow me on Twitter @BrandoCop
View all posts by Brandon C. Williams →
Tagged  Bone, cast, fan cast.
Bookmark the permalink.