A truism in movie-going is “cater to your audience” and Thor, from Marvel Studios, definitely did that.

Not to be outdone in their catering, so did the theatre itself.  Anyone who has gone to the movies in the last decade can let out a collective groan at the memory of more-than-one occurrence of sitting down to enjoy the main feature you paid to see and being forced to sit through twenty-plus minutes of previews.  Often times, several of the previews are clearly not for the expected audience attending the movie (example: preview for Winnie the Pooh before Scream).

Thor had no such disappointments or annoyances.  My screening had just four previews and all of them came to play.  The first was an extended preview for the much-anticipated Green Lantern movie, followed by a preview for the new X-men: First Class movie, which I’ve seen, but was no less impressive.  Next was an extended preview for the new J.J. Abrams/Steven Spielberg collaboration, Super 8.  The fourth was for Captain America which was clearly a shameless plug for the connection between Thor and the upcoming 2012 movie release of The Avengers, but it wouldn’t be Hollywood if there wasn’t at least one shameless plug involved. 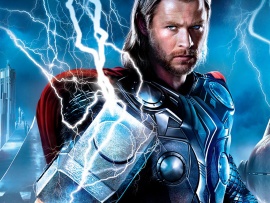 Thor, staring Chris Hemsworth (Star Trek, Red Dawn-2011) and Natalie Portman (Star Wars, Beautiful Girls) does well what so many comic book movies do terribly: it gives you exactly what you walked in expecting and manages not to disappoint or trip over itself to cater to a broader audience than just comic book fans.

The main villain in Thor is Loki (Tom Hiddleston), Thor’s half-brother.  The secondary villains are the Frost Giants of Jotunheim.  Granted, this may seem like an almost too-obvious choice in adversaries for Thor but Kenneth Branagh (director) does an exemplary job of not letting the story get away from itself.

Asgard plays a significant role in Thor, which is a visual treat.  From a special effects standpoint the realms of Asgard, Jotunheim and, to what extent you need special effects, Midgard (Earth) are all portrayed wonderfully. 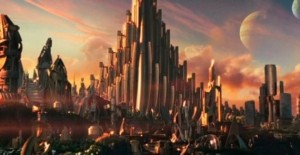 The plot of Thor revolves around the envy Loki feels for his half-brother, Thor’s own bravado and, in the end, reconciliation and acceptance.

To quote the friend I went to see Thor with, “Marvel really has gotten their act together when it comes to movies.”  The last part of that statement is telling, “when it comes to movies,” which is true but also portrays the belief many of us harbor that Marvel Comics is out of sorts in how they handle business.  But in the many-year ramp up to the Avengers movie coming out next year, Marvel has regained much of the respect it threw away with producing horrible movies like Daredevil and Elektra.  It shows the importance of Marvel taking control of their product and putting it under the umbrella of Marvel Studios.

Overall Thor is an epic movie with plenty of action, adventure, destruction and visual pleasures; everything a movie-goer could ask for.  It gets a rating of