Hello!  Welcome to another edition of Bin Fodder.  This week I review Dark Horse Comics’ mystical story of Lazarus Jack.  The magical story was written by Mark Ricketts who is known for such works as Nowheresville and Night Trippers along with a stint on Iron Man.  Horacio Domingues, who has done work on books like Incorruptible, Wildcats Nemesis and Doctor Who, handles the art. 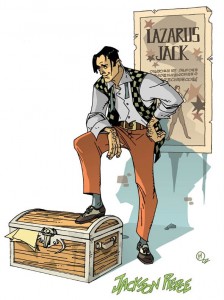 Stories involving magic are not uncommon in comics, in fact you’d be hard pressed to walk into any comic shop and not find dozens of them on the shelves at any given time.  So what’s different about Lazarus Jack?

For starters, it has the added bonus of the main character Jackson Pierce being a daredevil the likes of Houdini.  An added bonus is the demon Verdelet, an interesting twist in this tale.  And last, but certainly not least, trans-dimensional rifts and travel.

As it turns out Pierce is not only a daredevil but a magician who hopes to gain access to something very powerful.  But in his blindness and greed he loses that which is most important to him, and that is where the story begins. 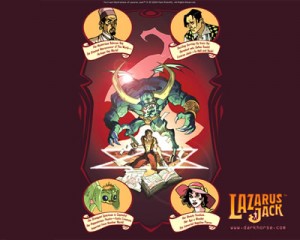 If you were presented with the opportunity to undo the one big mistake that irreparably sent your life in a course it did not belong, would you take it?  The easy answer is, yes, of course.  But do the dangers and risks outweigh the knowledge garnered by making the mistake in the first place?

I know that seems a little deep for a comic book, but Ricketts isn’t your standard surface-only type writer, his books go deep into the psyche of the characters and what comes out isn’t always pretty.

Ricketts takes the reader on a journey that is scattered and covers an immense amount of ground, but he does so in such a way as to leave you wanting to turn the next page because you simply cannot wait to see where the story is headed. 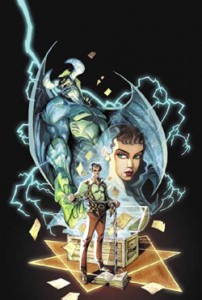 It’s like Alice tumbled through the looking glass but instead of finding a crazy rabbit and a freaky cat, she found dimensions without end and universe’s whose properties vary as much as the spectrum of color itself.

How do you know a story is really good?  When the possibilities that exist within the story outstrip the story itself.  Contained within the story of Lazarus Jack is the root for hundreds of issues worth of content, but the focus never sways from the main point of the story, that is the mark of a quality story.

Because of the high quality of writing and the playful, true-to-comics art, Lazarus Jack gets