The comic book industry is full of awesome books that a lot of readers never find out about because of various reasons.  Most people only buy mainstream, have limited access to independent books, or lack knowledgeable and helpful staff at their local comic shop…and the list goes on.

To paraphrase Bender “Bending” Rodriguez, I have come to free you from your lacking lives… the lacking part, not the lives part.

The subject of the launch of this weekly series is Image Comic’s classic 90s title: CyberForce.  I know, I know…I just blew your mind.  That’s an amazing title, right?  Totally.  But just wait, it gets better.  Anyone who reads comics is familiar with Marc Silvestri and Top Cow, his creation.  CyberForce was the first comic put out by Silvestri under this new merger with Image.

The series launched with a mini-series called “The Tin Men of War,” which is most commonly found now as a trade paperback.  It introduces you to the main characters of the CyberForce team: Heatwave (the powerhouse leader), Styker (the gun-toting militarist), Ripclaw (the badass), Cyblade (the sexy psychokinetic), Impact (the muscle), Velocity (the cute, young one) and Ballistic (the renegade).  Ballistic is initially a member of the Cyberdata team (the villain corporation) sent to collect “lost” members of their created tribe.  In a plot twist (spoiler alert) she turns out to be Velocity’s big sister and ends up joining CyberForce to take down the big bad corporation.

The series is wrought with kickass characters and storylines running throughout the thirty-five-plus issue run of the main series.  In addition to the main series there were several one-shots including a very entertaining JLA/Cyberforce crossover.

But one character stands out amongst the many that exist in the CyberForce universe as the baddest-assed villain of all: Killjoy.  Killjoy is a cybernetically-enhanced being bent on killing; how cool is that!?  She has the speed of Velocity, the marksmanship of Styker, and the killer instinct of Ripclaw, making her the most formidable foe CyberForce faces. 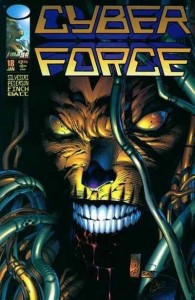 Silvestri left the project as a writer after issue 21 but the characters are no worse for wear.  I won’t spoil the ending of the series by going into too much detail but there’s a pretty awesome storyline to close out the series.

CyberForce had a rebirth in the early 2000’s.  It was decent but didn’t have the feel the original series had.  It lacked that… 90s quality which, try as we might to ignore, was something special.