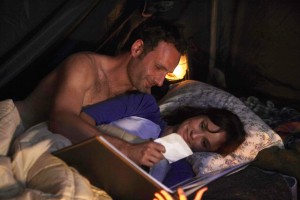 I’ll start by saying Michael Rooker is a good actor, I really believed his pleas to God, and I believed even more his cursing of said God. How about that reunion of Rick and his family, if that didn’t tug at the ol’ heart strings I don’t know what would. I don’t know about you, but wasn’t that a weird sex scene with their kid right next to them? Rick is pretty dumb, and taking 4 of the best guys away from the camp to the most dangerous place possible just to save a crazy racist. The music in this episode did such a good job of evoking emotion that I felt uneasy while watching Shane beat the wife beater. Guess what? Dixon is gone leaving only his severed hand behind, did he jump? Did he escape? You’ll have to keep watching.