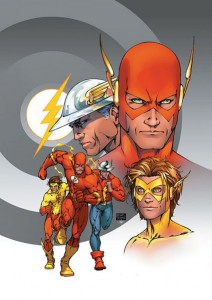 In a month that we are all forced to think about family, I’m spotlighting one of the most family centric comics ever.

The Flash is one of the few A-list heroes who has been able to pass his mantle down without the fans going insane (talking to you Batman and Captain America). The Flash is full of humor and has some of the most touching moments in comics, everyone’s a family here.

The Flash’s of the past, present, and future are all bound by the speed force and even the Flash’s rogue gallery stick together like a family. I know that a lot of people think the Flash is a joke since his power is that he runs fast, but the writers use super speed in so many interesting ways its worth picking up. The best part of the Flash has got to be the ability to jump on pretty often, they constantly give new readers a chance to pick up a great comic and enjoy one of the coolest characters in comics.

I'm one of the main contributors to 8 DAG and I take pride in my other job as Public/Staff relations. I'm a comics and movie junkie and I love to podcast. Follow me on Twitter @BrandoCop
View all posts by Brandon C. Williams →
Tagged  comic alert, the flash.
Bookmark the permalink.