I’ll be the first to admit that Scarlett Couture isn’t normally the kind of stuff I read; which is one of the main reasons I was interested in giving it a chance to win me over.

Stylistically, Des Taylor the artist and writer on the book, hits his mark. Digitally drawn each panel is crisp and layered with detail. He’s able to create affects within panel sequences that could never be done in a traditional format and this adds a very cool factor to the look and feel of the comic.

Whether or not these were specific influences the book has a definitive feel of comics that have come before it: Danger Girls, Aspen, Fathom, etc. based on the portrayal and hyper-sexualization of the female characters. 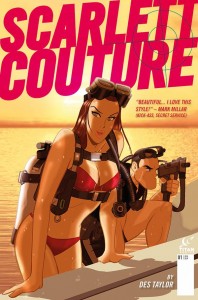 us. It reminded me a lot of Archer and given the story at hand it seemed promising that the story could go in that kind of direction.

Sadly, as the issues went on this inner-monologue of self-assurance, humor and attempts at putting her childhood pains in perspective comes across merely as another trope at displaying ho

w even though she’s meant to be a strong, capable woman; she’s a woman which makes her less-than something else.

The writing has moments where I am genuinely interested in where the story is taking me, but more often than not I’m left wanting. It’s certainly not easy to be both the writer and artist on a book and given that it’s a creator-owned property there’s a negligible level of influence an editor could exert over the direction of the plot or the dialogue.

Whereas I am well aware that a book filled with glamorous looking models-by-day secret-agents-by-night will appeal to a large group of comic book readers; I am hopeful that as his daughters grow up and start reading comics he will add less-sexualized strong role models they can look up to.

If you’re in the mood for a very light-hearted book filled with big-boobed babes with brooding lightly-bearded men, pick up this book.  If not, skip it and look at some of the other great titles Titan is putting out these days (other reviews posted soon!)

This is your Bin Fodder guru, Tim Blacksmith, signing off.