There’s something about picking up a comic you’ve never read and feeling right at home. Keith Giffen and Alan Grant achieve that with Jeremiah Harm. The title character is equal parts lone-gunman and Hawkeye (from M.A.S.H.); though that may not have been what they were going for. He has a calmness that just shouldn’t exist in a person dealing with the kinds of issues he faces in this story but he also commands respect with his talents; those around him understand that suffers their existence so long as they don’t bother him…too much. 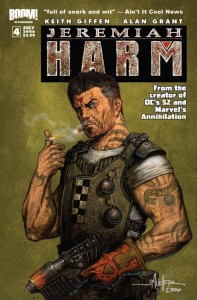 Giffen, who I am more familiar with, brings his talents to the book through the levity and quick-whit brought often by numerous characters as this sci-fi adventure starts out far and comes close to home – an inverse to the norm.

Harm follows the exploits of vaunted criminals escaped from a prison in the ocean of space hell-bent on achieving their goal: finding a mystical shard and destroying the universe. Truly, the mastermind of this scheme is insane (which you pick up on early and really comes to home as he spends several pages carrying around a severed head…which he talks to). Harm, something of a bounty hunter, was imprisoned in the same complex and is released when it is apparent to the overseer that they will be held liable to crimes committed by the devilish trio.

Written from an interesting perspective where Humans are not, in fact, the most competent and evolved creatures in the universe, but instead are thought rather lowly of. A criminally wasteful society the alien monsters think nothing of the destruction wrought in search of their prize. 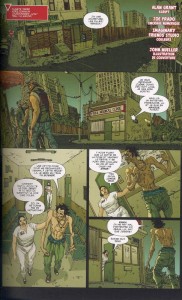 The art is gritty and layered. It takes a couple reads through to really notice all that’s going on – it’s like a Transmetropolitan issue that way – and very dark. The copy I read is high-glass paper and the pages seem to almost drink in the light. Stylistically the issues are seamless. Though Rael Lyra handles issues one thru three and Rafael Albuquerque did four and five the character designs and backgrounds don’t miss a beat.

Much like a Predator vs. Alien story the tale would not be complete if some humans didn’t find a way to fall into the mix – often getting in the way but fortuitously managing to be of assistance at a critical time.

Jeremiah Harm is an interesting read; not for everyone’s tastes. If you like gritty, dark, sci-fi stories it’s worth checking out for sure. If you prefer your heroes glossy and picturesque then you may want to shy away.

This is your Bin Fodder guru, Tim Blacksmith, signing off.