Geek Review – Sally Of The Wasteland #5 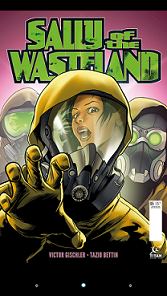 Sally is a girl from a small post-apocalyptic town. She’s rough and chaotic and in love with Tommy, the clueless boy from the same area who is weak and incapable of defending himself. In the first issue a mystery girl walks into the town bar and asks for help because she is about to embark on a quest that may change all their lives. She found a device and saw a hot air balloon and now thinks there may be a thriving remnant of the “world that was” out there.

What is nice about Sally is the direct approach to the story. It’s not a bunch of atmosphere and filler with a story that may go nowhere. It was a five issue mini about a group trying to get from point-a to point-b in an extremely harsh environment. 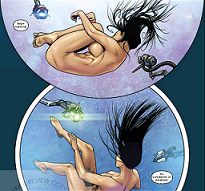 Tazio Bettin draws a feisty vixen with Sally. She wields an ax or shotgun like Bruce Campbell fighting the dead, and sometimes she strips down to nothing or thrusts her vagina at cannibal-pirates and asks to be “raped first…” in order to cause a distraction. With each of these radical characteristics Bettin brings out a consistent style that covers the range needed. His backgrounds and sceneries flavor the world with the atmosphere that other comics may try to cover with superflous story telling. With five issues the arc paces along smoothly and the layout pitches the story very well.

In issue #5 Sally and a those remaining (can’t say who makes it to the end) find the remnant they were searching for. The world that was doesn’t quite pan out the way they hoped and Gischler leaves it in a very finished way that could leave room for another installment (he said there may be during his interview with 8DAG).

It was a good story and the characters were likable. Sally herself, who is hot and fiery but kind of direct and almost ignorant with her approach, really grows on you. Cpt. Sam isn’t entirely likable but he isn’t really supposed to be. Others stood out less, so when they fell along the way I’m not entirely sure it felt like a loss, or was even supposed to. It was a good short series and worth picking up. Issue #5 hit stands on the 26th of November and I recommend you check out the entire series.

As always feel free to disagree in the comments below or @werewolforigin on twitter.

Writer/Artist for X amount of years. Recently worked with people from IGN on a comic and studied writing under Victor Gischler of Marvel Comics at RSU in Oklahoma more X amount of years ago. Follow me @WerewolfOrigin on twitter
View all posts by Eric bookout →
Tagged  comic review, sally #5, sally of the wasteland, Tazio Bettin, titan, Titan Comics, Victor Gischler.
Bookmark the permalink.