Over many years of sci-fi and horror there have been a plethura of movie monsters to grace the screen with their terrifying or impressive presence. Some were just creative, some were a masterpiece of sculpt and latex and puppetry. Disregarding anything made with a computer and focusing just on good camera work, lighting, and costume, here is the list of the eightest and greatest movie monsters to ever hit the screen. 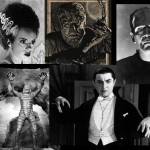 8. Classic Movie Monsters from the 30’s and 40’s. There were a lot of characters who reached iconic status in the black and white era of cinema. While the content in the movies doesn’t always hold to what we consider terrifying today, the images have lasted and inspired future generations. There were quite a few at the time so we just want to say they all deserve a spot here. 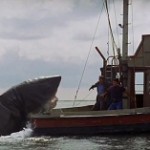 7. The Shark From Jaws. This movie is a classic and the effects and effort it took to create have been well documented. If you watch it today the animatronics aren’t as “brought-to-life” as they may have once been considered, but I won’t say it requires that much willful suspension of disbelief to see past it. It’s a good effect and a good monster and it still keeps people out of the water. 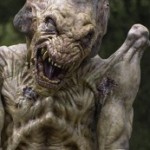 6. Pumpkinhead. This movie came out in 1988 and it still has one of the best movie monsters ever created. The paint on the latex is just brilliant. Stan Winston is the FX master who designed and built this monster, and it weren’t for the fact that the movie lives more in the shadows with “cult classics” and isn’t as ground breaking for the masses as a few other iconic pieces I may have put this at number one. 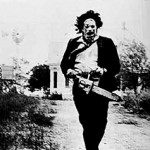 5. Leatherface. Leatherface is like the Shark from Jaws in a way. He’s a great character but he has the potential to be real. He’s not actually a supernatural monster, he’s just a man wearing a skin mask and a suit who weilds a chainsaw. The Texas Chainsaw Massacre is so classic and brilliant and the crazy farm family in it is still unmatched in creepiness. It may just be a strip of skin stretched across a normal man, but he is frightening and the design behind this simple beast is note worthy. 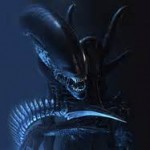 4. Xenomorph. The Xenomorphs and FaceHuggers from the movie Alien are amazing. The design behind them is brilliant. H. R. Giger, who is a creepy artist, is the man responsible behind these twisted beings. The movie broke ground with the concept of space horror, and then they took things even further by creating these terrifying creatures that look incredibly cool while still being the stuff of nightmares. If Leatherface is simple and gritty, then a xenomorph is complex and sleek. They are the ultimate killers. 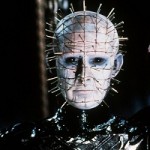 3. Pinhead. From Hellraiser this cenobite front man is a horror in every sense of the word. Not only do all the cenobites embody hellish torture and torment on their selves, but they exist to bring that pain to others. The stories they exist in are nightmarish and Pinhead leads the forefront of these nightmares. He’s creepy, and awesome, and number 3 on the list. 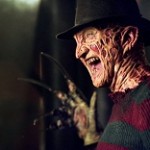 2. Freddie Krueger. There are 3 main characters I believe, and 3 movies they belong to, that will come up in every discussion about horror movies. Jason Voorhees, Michael Meyers, and Freddie Krueger. Jason and Michael have their place in the genre but not on the list of best movie monsters the way that Freddie does. Beyond the Cenobites, who are nightmarish but actually from hell, Freddie IS from Nightmares. He rules the dreamscape and he kills with a hand full of knives while you sleep. Iconic and well done even by todays standards. 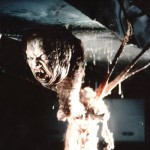 1. The Thing. From John Carpenter’s The Thing, this monster takes number one for a very simple reason. It can be anything. The monster is a head with tenticles, then it looks like you, until your stomache opens up and reveals you’re really a monster. Every corner of this creature can become a mouth or a claw or some creepy tenticle. It is frightening in everyone one of it’s thousands of looks and the work that went into the original, genius. The Thing is gross, creepy, scary, and everything else that a horror monster wants to be. And they made it well. No CGI, just craft. Really excellent craft.