Last night was the our monthly Graphic Novel Book Club meet up at Boomerang Comics in Lewisville, TX. We discussed the first volume of Coffin Hill by Caitlin Kittredge and Inaki Miranda. Coffin Hill is a horror comic that first hit stands last October. It’s about an angsty female witch with a slight “goth” vibe who has to return home after about ten-years, to a town that hates her, to confront some of her troubling and supernatural past. 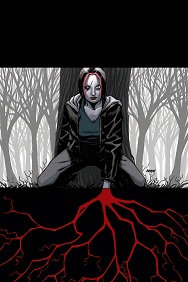 First I need to say I was a little late to the meet up, so there may be some opinions or info relayed that I didn’t quite grasp. I knocked on the glass door at the comic shop after arriving ten minutes late and the owner, Niel, let me in. It seemed like they were discussing the fun use of panels and I’ll admit that the layout was really good. Not only does it have panels that bleed one scene into another and transition in clever ways but there are several two page spreads that you have to flip the book up on it’s side to read. 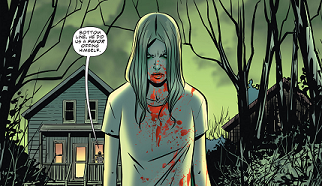 Being late I had to play catch up. “Did you talk about the art?” They had. I added my two cents, which basically amounts to what everyone seemed to agree with. The art is consistent and amazing and Inaki Miranda really brought life to some of these pages. The book is told through out several flashbacks intermingled with the present, with the characters displaying several different ages. The artist amzingly captured characters that were very obviously the same person at different points in life. Impressive. The book was also consistent. Some artist tend to phone it in on smaller panels or pan shots. Not Miranda. Every panel was approached with the same level of attention and detail which kept the feel. 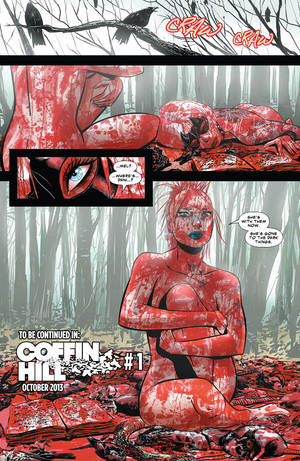 The trouble with Coffin Hill, or so it seemed, was the atmosphere created by the characters themselves. The protagonist, Eve, a young witch from Coffin Hill and apparently the heir to an evil legacy is a tad… immature? Her story isn’t presented in it’s entirety during this first volume so there may be more depth than was apparent here. It seemed like the gerneral consensus of the group supported this idea.

The problem with Eve, is she still has a rebellious teen attitude. They jump to flashbacks of her tearing through her parents home and displaying open defiance. She dabbles in her witch craft with a haphazard, caution-to-the-wind, air about everything. This leads to some unfortunate deaths and other misfortunes amongst her friends. She still has this attitude in her mid-twenties.

Her quasi-love interest, who is now the Sheriff of Coffin Hill (which is kind of convenient since Eve got her life together and became a cop herself after she left Coffin Hill), seems kind of wishy-washy. One moment he hates Eve for the trouble she caused them all when they were kids. The next he needs her help to solve crimes, then they love each other, then he loves his old girlfriend, then Eve again. 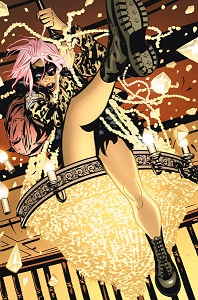 One thing I mentioned during this sit down was that Coffin Hill reminded me a lot of Locke and Key. I remember when I started it I thought it had a certain feel that just wasn’t great. The characters behaved in a way that made them less relatable and less likable. Then the story just exploded and it is one of the best things ever printed. Coffin Hill could go that way. This was a first volume and I had to treat it as such. Someone mentioned Niel Gaimen’s Sandman, saying they wouldn’t try to introduce anyone to it with volume one. I can see that. At the same time my old writing professor used to say, “… sometimes to get peoples attention you have to introduce the plot hook at the very beginning”.

In the end it seemed like a split. Some people said they will pick up vol. 2 when it comes out in January, and some didn’t. If you like horror comics and sexy comic babes i say check it out. The art is unbelievably awesome and there is some backbone to the story that I suspect will really flesh out in later issues. It’s a steal at 9.99$ too, and you get 7-issues in vol. 1. There’s definite value there. I may get vol. 2 for that reason alone.

Feel free to disagree in the comments section or @werewolforigin on twitter.