Monty Nero and Mike Dowling put their heads together outside Loch Ness and dreamt Death Sentence. It’s an artsy graphic novel now. You may have seen our previous reviews of the individual issues. What I can say for a fact now, looking back some of my speculations seem a bit silly, is that this is really an solid story start to finish. I once speculated at an on-going series with spin offs, a superhero team up with the three main stars, and multiple new characters with crazy powers. I dreamt of TV and movie adaptations (which could still be awesome).  I was wrong but the complete story still wrapped up pretty well without me.

The story is like no other that I’ve ever read. Yes, it has people with super powers and yes the government wants to control them. It has heroes… kinda, and a villain… kinda. The twist in Death Sentence is that it’s outlandish vagabonds and screw-ups with super powers all have an STD. The G-Virus (not the resident evil 2 G-Virus) is a super AIDS like virus that kills in 6 months with no cure. Plus side, you get super powers on your way out. 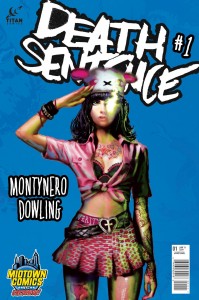 Your three main characters, Monty, Weisel, and Varity all are in their last six months and each handles it in different ways. Weisel goes into self destruct mode which coincides with his failing career as a washed up rock star. Varity plays the self pity part. Monty, the later revealed villain of the piece, goes power crazy.

The art is rough and raw, Monty Nero does the amazing covers as well as writes the story, and Dowling spills out a rich and gritty world filled with rugged black lining and decedent detail. Together they spin a tale of two unlikely kinda-anti-heroes who reluctantly let themselves make a last ditch effort to stop power crazed Monty from ruling the world. Its raw, sexy, and filled with addled debauchery as it tries to bring these wallowed out husks into something that seems like humanity. Varity and Weisel are as messed up as Monty in the end but for some reason make different choices. My only real flaw with the story is Weisel, but even his reasons can be understood in the end. Also, maybe Varity is a bitty too “artsy recluse” and I don’t think she ever wears that hat (at least not enough to warrant sporting it on every cover).

The story is good though, and printed by TITAN publishing. If it isn’t in your local store ask about it. A six issue compilation that brings the whole story to close and it is well worth the read.

Feel free to disagree with me below or @werewolforigin on twitter.