Price: Free (app is free, Netflix service is not)

Surely by now we all know what Netflix is all about. The streaming service has been around for quite some time and has made a definite impact on how we view our content. One can honestly say that Netflix changed the game when it was released upon the world, and took down a lot of video rental stores (remember those?) in the process. The Netflix app for Android has been available since 2011, so it has seen a plethora of improvements since its release. 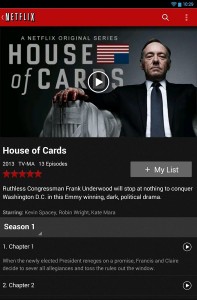 Initially, I remember having some streaming issues while using the app on my Droid Incredible, but when Smartphones improved, the functionality of the app did so as well. I find the app to be damn near flawless. I have yet to encounter any significant problems with the app, and I use it quite frequently. My Note 3 handles the app beautifully, and having access to your library via a mobile device is awesome. The playback quality is great, and those initial streaming issues are long gone. Being able to manage your queue list is great, as well. I can’t tell you how many times I’ve been talking with friends about a show and they suggest one that I haven’t seen. So I just look it up on Netflix on my phone and add it to my list. Regarding aesthetics, the app has improved in that arena as well. The Netflix app is sleek, functional, and quite simple to use. This is as pretty much straight forward of an app as you can get. 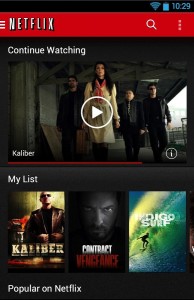 The one knock I had with the app when first released was the look, it just looked antiquated and there was nothing there that made it stand out. Netflix improved on that by creating a modern, smooth aesthetic that makes you want to use the app as soon as you open it. I have yet to hear of any complaints about the actual app from anyone whom I have asked. They always have complaints about the timely update of seasons of their favorite shows, or that it is taking forever for them to get a certain movie, but nothing in the way of the functionality or aesthetics of the app itself. The app is only going to get better, as Netflix continues to give us their own great shows, such as House of Cards and Orange is the New Black. Marvel has bought into Netflix, and Chelsea Handler has just signed on as well. The original content is improving; the technology is improving, so there is no reason to believe that the app will not improve as well. 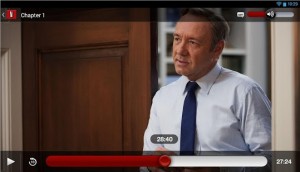 I’m a lifelong comic book fan. Comics pulled me in at an early age, with influences ranging from Chris Claremont’s historic X-Men run, Walt Simonson’s Thor run, Mike Zeck’s run on The Punisher limited series, Jim Lee’s X-Men, the early 90’s X-Men animated series, and the best cartoon ever made, Batman: The Animated Series. As a kid, these comics and cartoons gave me a new world to go to when the real world wasn’t so nice. Because of this, comic books will always have a special place in my heart. I love everything about comics, and still get the same feeling reading them today as I did when I was a kid. My major in college was psychology, so I love to incorporate that into comics.
View all posts by Steven Brewer →
Tagged  android, app, app review, Google, google play, Movies, Netflix, review, streaming, Television, tv, TV shows.
Bookmark the permalink.