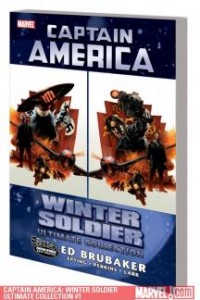 We reviewed Captain America: Winter Soldier last night at the book club. One thing about the actual club meeting was that it was short. Apparently there was some confusion over whether or not we meet on the last Tuesday of every month or the fourth Tuesday of every month (it’s now the last but was supposed to be the fourth). So only about half the gang was there because apparently some had shown up the week before on the actual night to discuss the book. As a result of showing up on the wrong night we we’re still allowed to use the space inside Boomerang Comics to meet and discuss but were short on time.

Winter Soldier is an intense adventure brilliantly paced and wonderfully written by five time Eisner Award-nominee Ed Brubaker. It tells the story primarily of Captain America and a plot to bring personal ruin to him through the use of the Cosmic Cube and a mysterious figure called Winter Soldier. Winter Soldier is a Soviet ghost story. A man who doesn’t appear to age seems to show up at key moments in history spread over 50-years and is linked to assassinations and deceptions that fall in favor for the Russians. 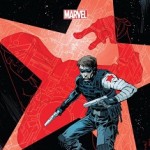 The club discussions were short and were already in depth by the time I showed (not early but on time). The discussion was on Marvel’s Civil War, and I had to add that Winter Soldier feels like the perfect jumping off point for the Civil War and all the other major events that followed over the next few years. I’ve sort of fallen out of the Marvel Universe in the past 3-4 years but I do remember feeling how epic it was during the time immediately following this story. I hadn’t read a lot of Cap at that time and this story flowed so seamlessly. You don’t have to be a Marvel nutcase to get this story. 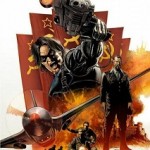 For those of you who don’t know Marvel had a run that was about 7-years long full of events that coalesced into one final major hoorah called SIEGE. I can’t even remember all the events involved, Civil War, Ragnarok, Secret Invasion, The Death of Captain America, and I feel like the Winter Soldier story arc is where a person should start if they are going to travel through that long odyssey of Marvel mayham (I might also recommend you  check out the ALIAS stuff with Jessica Jones and then just follow her through the years from there including The Pulse and her marriage to Nick Cage). It’s good stuff really. 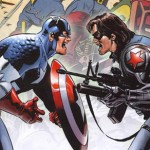 Eventually the club segued into the movie and how Christopher Evans has only signed on for 3 more movies while the actor playing Winter Soldier has signed on for 7 more. I have my own theories on why (and you would to if you read the events leading up to SIEGE). But without following the course of the club I do want to say that the story in Winter Soldier is a solid piece of story telling. The one armed killer has deep ties to Cap that weave through his history. The secrets behind him and his origin are revealed about half way so it’s not a big secret (but I guess I won’t say). I feel like they do a fair amount of red herrings though and leave you a little confused as 1950’s Bucky shows up drunk in a bar before getting shot in the chest. 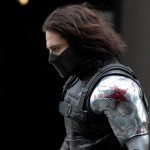 I haven’t seen the film yet but I hear the only real tie from one to the other is the origin of the Winter Soldier. I guess I’ll check it out soon. The only other things I gathered from meeting last night was that Cap has really become better over the past 10-years (everything 20-50 years back was hokey), some people don’t like the Batman movies, and some people are still disturbed by the idea of Batfleck.

Feel free to comment below @werewolforigin on twitter, and if you are interested in participating next month we are reading Days Of Future Past, the X-MEN saga the upcoming movie will be based upon (I have never read it so my opinion will be fresh).