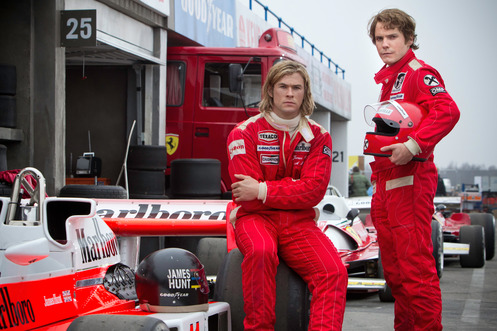 Written by Peter Morgan ( Frost/Nixon, The Queen, The Damned United )

Chris Hemsworth ( Thor, The Cabin in the Woods, Snow White and the Huntsman )

Never heard of James Hunt or Niki Lauda ? Never took any interest in Formula 1 ?  Don’t let either of those things stop you from seeing what is a great film.  The best thing about this film is its honesty. It shows the raw passion that the two drivers had, even though they had a totally different way of living their lives and playing the very sport that was paying their wages. They both wanted one thing and one thing only…    to win !  While Hunt is the textbook racing playboy “burning the candle at both ends”, and he probably got through more than his fair share of candles,
Lauda by comparison would these days be classified as a racing nerd, being totally focused on the job at hand and not letting pointless things like having fun  or even knowing where to buy candles let alone how to burn them get in his way.

The camera work specially on the racing scenes is awesome, it really does give the viewer a feeling of just how rough and ready the racing was back
then as compared to the overly safety conscious racing of today, where for the most part it can be a little processional and pedestrian even at the speeds they race today. Yes the deaths back in the 70’s happened almost every race it seems and  it was accepted as part and parcel of the sport; you drive fast you die fast, this is what made it the sport what it is.

The acting by Hemsworth and Brühl is outstanding, with the latter being fully convincing as Lauda almost to the point of being
uncanny and the voice is spot on.  The film shows how even with a hatred of each other on the track there was a sense of loyalty to each other off it, not in a “go out for a few beers” sort of way ,but more in a “we lived through another race lets see what happens at the next one”.  The two racers talked to each other but it was  more ribbing and less how you doing.  At the end of the day they didn’t need to be friends nor ,for that matter, like each other  all they had to do was finish in front of the other one. 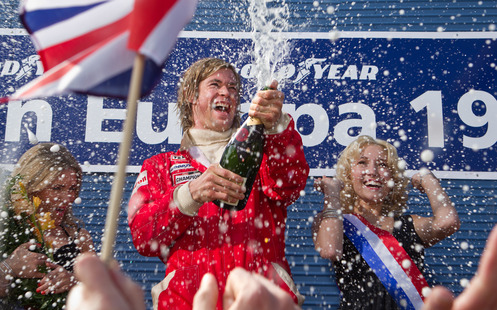 You might not like F1 or car racing films and you don’t even have to, you don’t even need to know anything about the rivalry between the two racers
but at the end of the film you will have the utmost respect for what they were willing to put themselves through in order to make their dream of being world champion a reality.