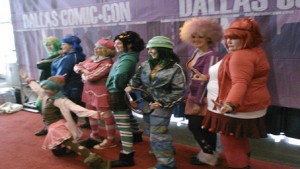 Today was day 2 of the Dallas Sci Fi Expo at the Irving Convention Center in Irving Texas. Like I said in my Day 1 review, today was slightly better for the simple fact that it was less crowded. Sure Karen Gillan was gone and the cosplay contest had been the day before, but there was room to breath today. You could actually stop someone for a photo without holding up any kind of line or creating a ten car pile up. The parking garage still had room in it and there were still plenty of good players in the mix. 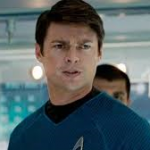 Karl Urban was still there today and Richard Dryfus (who oddly had the largest autograph signing line at this Sci Fi Expo). Urban stuck around after his panel to sign autographs for longer than he was scheduled to. He looked like he was coming straight off the set of Almost Human with his weathered green cargo jacket and scarf. 7th Doctor Sylvester McCoy was still there today as well, set back just a few feet from Urban on the 4th floor. It was nifty to see a real Doctor for the first time ever. I didn’t pee myself but I kinda wanted to. 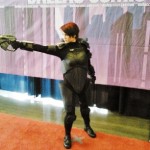 The red carpet event was more open today and though there were some good costumes from Day 1 missing from the showcase there was still good cosplay to be had (See our top 8 list). A lot of good teams, like the Sugar Rush family (seen above). I liked the Fem Shep from Mass Effect (seen to right). It may not be this way for everyone but for me cosplay is the biggest and best part of cons. It’s like Halloween only in a completely different time of the year and some of costumes are so inventive and you are surrounded by just the people to “get it”. 1 in 50 may recognize Fem Shep on Halloween, or Codex and Claira. At a con the odds are ever in your favor (I did see a Katniss Everdeen). 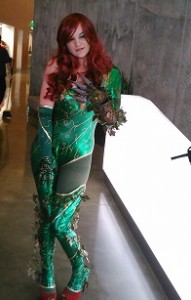 With events wrapped up I won’t say it was the best thing I’ve ever experienced. It was good though. I almost regret not buying the con exclusive POP Hologram Darth Vader. I haven’t started a POP figure collection yet but I am finding the temptation harder and harder to resist as I see the Jon Snow and Benson from Adventure Time figures. It seems they always have them as exclusives at cons to. I should have picked one up. The celeb status wasn’t the biggest at the Sci Fi Expo but it did have a few good guests. I would like to have seen more displays and sets for posing. Like the Star Wars Endor set up on the 3rd floor. One thing I liked was the local artist area also on 3rd.

All over now and it wasn’t a blow out but a decent way to spend the weekend. And like I’ve already said, the costumes and nerd surroundings are always great. The Dallas Comic Con is set for mid may and will be at a different venue. I’m interested to see how they use the space. It’s too late to check out the Sci Fi Expo but if you end up in the DFW area this May I’ll see you at the con.

Feel free to disagree with me below or @werewolforigin on twitter. Also check out the Day 1 review and our other articles about this 2 day event. The End.