Geek Movie Review: The Hobbit: The Desolation of Smaug 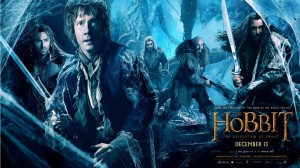 I’m going to start out by offering a bit of background knowledge about myself: I am a huge fan of Tolkien. I even have a tattoo of the Tree of Gondor. I also read The Hobbit to my two children this past summer, so the specifics of the novel are still fresh in my brain.
Having said that, I thought The Desolation of Smaug was awesome. 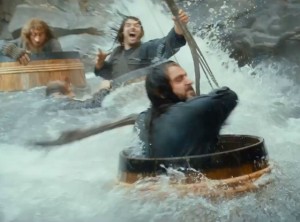 The first part of the movie pretty closely follows the adventures from the book. However, several times I found myself thinking something that I never thought I would think while watching a Peter Jackson movie: “That felt rushed.”  One of the things I was really looking forward to was Beorn and his home. He was one of my favorite characters from the book. The character from the movie was completely forgettable. He’s barely even there. And the part <spoiler alert> when the dwarves are being held by the Elves of Mirkwood Forest felt rushed. Although, the rushed love story was still adorable. And the barrel-riding was every bit as fun as I was hoping it would be.

I was pleasantly surprised at how much I liked Evangeline Lilly as Tauriel. Being a huge Lost fan (and by no means a fan of Kate), I was afraid it would be difficult to see her as someone other than Kate. But she was so beautiful and soft and graceful that Kate never even came to mind. I even thought to myself, “She’s too good for that Legolas!” and I love Legolas.

Then, of course there’s Benedict Cumberbatch playing both major villains of the movie: Smaug and the Necromancer. He was amazing. The Necromancer was extremely creepy with his backwards talking. And Smaug was beautiful. I wish the movie would have included a little more of Bilbo and Smaug’s banter from the book just because I personally liked the banter and we all know that Martin Freeman and Benedict Cumberbatch are masters of bantering with each other, but you have to save room for the action. And this movie was far more action-packed than An Unexpected Journey. Watching Smaug crash through the cavern of gold in 3-D was fun as hell. 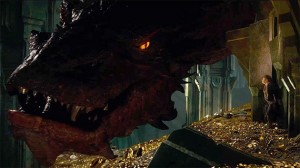 My biggest complaint is probably with the 48fps (frames per second). Jackson says that it improves the 3-D. I think he may be right on that. The 3-D in this movie was probably the best I’ve seen. However, some of the scenes looked less like you were watching a movie and more like you were watching the “behinds the scenes” features of the movie. It almost seemed like the high frame rate made it so realistic that it took away from the cinematic feel.  But, I still recommend seeing it in 3-D. The Smaug-crashing and barrel-riding scenes alone make it worth the extra money and hfr. And no matter how you see it, you do need to see it. I’m already planning when I’m going to see it again.