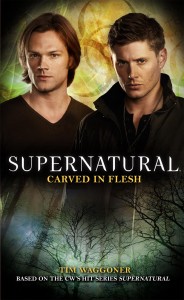 The latest installment of the Supernatural book series, Carved In Flesh, by Tim Waggoner was a good read. Waggoner has a solid history with this genre. Writing every angle from Fantasy and Vampire Horror to Cthulhu Mythos. Carved In Flesh was none of the above. While you can’t delve into a Supernatural story, written or otherwise, and expect anything but some version of horror or macabre with a touch of humor this one was slightly different. It had a classic tie-in which I didn’t expect. A twist if you will. While this is the second Supernatural book I’ve read, and I don’t really know they may all be this way, it had levels of story the show doesn’t have. Of course you get more detail and internalization with the written word, you have to imagine what melting flesh would look like. Still, with these books I’ve definitely gone on a ride with the Winchesters like no episode to date (not to belittle the show in any way. I’m peeing my pants to find out what happens next now that the Angels have fallen). The books have monster after monster like a house of mirrors… if it were made of monsters. You think going left is the way out then, BAM, another twist and another radical creature from your nightmares.

Carved In Flesh starts out with what seems to be a Black Dog. The show has mentioned them a few times and never truly defined them. I know they are bad omens just from the Harry Potter series but I always assumed there was some truth or at least true as in based on legend and not some crap pulled from the sky. The story in CIV (Carved In Flesh) throws the idea of a Black Dog being something you could wiki and find a real answer out the window. They just come out and say it. We’re not totally sure what a Black Dog is but we know they’re bad. 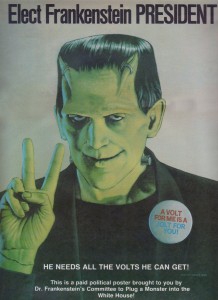 Part way through this tale we get lead onto another path. One that involves Frankenstein-esque ideas. Maybe this isn’t just a town with some evil canine that has to many lore surrounding it to clearly pin down. Maybe this is just a serial killer wack job making his own playthings. Next thing you know there’s a reaper involved and an alchemist and Sam gets “death vision” and the whole story goes out of control. IDK if I’ve ever read something that was so rising action until the end, before climax then half a page of falling action. I’m not even sure if I agree with it.It didn’t stop me from turning pages though.

By the end we find out some interesting histories about our villain and we deal with a multitude of things that go bump in the night. It ties into the series nicely, taking place between the episodes Time After Time and The Slice Girls, from season 7. The general idea of going on a hunt between such an epic battle between the leviathan, who have just adiosed Bobby, is given an explanation as well. You’re not left twiddling your thumbs up your butt wondering, gee… that sure is odd to take a break from the big picture and go on a hunting trip so soon after losing your father-figure.

All in all it was a good taste of Winchester madness during the off season. I’d give it four very enthusiastic thumbs up (two of those thumbs have been attached to my hands by magic and have minds of their own) out of five (I have five thumbs total). I love the show and am developing a very impressive collection of Supernatural books so I’ll definitely get the next one. If you like the show or like macabre then I’d recommend you check out the newest adventures of Sam and Dean Winchester from Titan Books. Find it here.