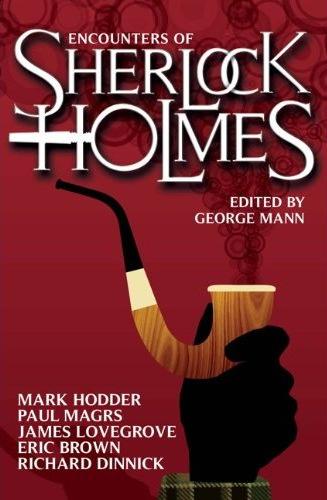 I know this is something like the third book I’ve reviewed involving the world’s greatest detective, Sherlock Holmes, so I promise it is the last for a while.  With that said, I recently read Encounters of Sherlock Holmes, a compilation of short stories written by various authors putting their own spin on the classic hero.  Edited by George Mann and with an introduction written by him as well, this book is a great addition to any Sherlock Holmes collection.  Here is a brief synopsis of the book from the publisher’s website…

A brand-new collection of Sherlock Holmes stories from a variety of exciting voices in modern horror and steampunk, including James Lovegrove, Paul Magrs and Mark Hodder. Edited by respected anthologist George Mann, and including a story by Mann himself.

If you are anything like me, I know what you are thinking already!  The only word that stood out in that synopsis was steampunk, and the mere mention of the word made you wanna trip some earth-tone clad guy wearing goggles and scream, “where’s your dirigible now, buddy!?”  However, if you read my review of the steampunk stinker that was the Aylesford Skull some weeks ago, you’ll remember that I am fully on your side in this debate.  Although, I pointed out in that article that the genre that has come to be known as steampunk, in my opinion, was created long before the term was coined.  Authors such as Verne, Wells, Lovecraft, and of course Conan Doyle created a style of sculpting their fictional worlds that modern authors have expanded upon and given a name to.  With that in mind, who better to expand upon the world of Sherlock Holmes than the authors writing in the genre today that is the closest match for the style of writing those greats undertook so many years ago.  I would also like to point out that almost every author in this compilation has at one time or another written stories for the Doctor Who series.  That is like being entrusted with voicing TWO of England’s most beloved fictional characters of all time, Sherlock and the Doctor.

Being a huge fan of Sherlock Holmes, I thoroughly enjoyed almost every story in the collection.  There was one or two that I wasn’t the biggest fan of.  Doyle expressly made Sherlock a disbeliever in the supernatural.  Holmes was quick to debunk and criticize anyone convinced of such goings on.  Yet, many times nowadays authors rely on the supernatural as a crutch to deliver a good mystery for the detective to solve.   While not poorly written, or boring in any way, I personally find it to be lazy storytelling and expect a good complex mystery for the intrepid detective to solve, not an encounter with Frankenstein’s monster.  There were plenty of well thought out mysteries in this collection as well as guest appearances in the stories by the likes of H.G. Wells and even Mann’s own fictional investigators, Newbury and Hobbes.  It is evident that the authors of these stories are well versed in their Holmesian lore and do a fantastic job of continuing the adventures of Sherlock and his partner Watson.  I was particularly amused by the story written by David Barnett entitled Women’s Work.  He puts an amusing spin on the Sherlock Holmes mythos by having the duo’s ever-present landlady Mrs. Hudson being the actual driving force behind the solution to his mystery while Holmes languishes in a cocaine-induced stupor.  I highly recommend this collection to anyone who’s a fan of Doyle’s work or even just a fan of mysteries in general.  It is a fun read and the short-story format means that if you’re not particularly enjoying one of the narratives, in a few pages you’ll have a brand new mystery to hopefully enjoy.

Encounters of Sherlock Holmes was courtesy of Titan Books and can be purchased here.