Another recommendation this week, Dark Horse Comics Arch Enemies is an interesting four-part mini-series.  At its heart the story is very relatable and is something many people have experienced – having a terrible roommate.

I have been blessed, if you don’t count those annoying years at home, with tremendous roommates…for the most part, but even the ones I didn’t like weren’t Supervillains!  At least, I don’t think so…no, probably not. 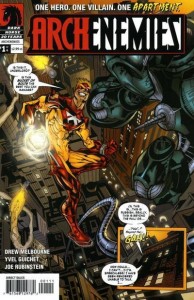 In Arch Enemies two men, Ethan Baxter and Vincent Darko (no relation to Donnie), have become roommates.  Ethan is the typical jock; he lacks regard for others.  Vincent is a nerd complete glasses and a penchant to do evil.  The characters are too stereotypical to meet the needs of the story.  Ethan is an Adonis when not wearing a shirt (which is oddly often) and Vincent is gangly and thin to the point of malnourishment concerns.

The writing in each issue has its moments of strength, especially the wit and clever remarks.  But it’s clear that the writer, Drew Melbourne is not a comics writer; his style is more prose.  The pacing is difficult and the disjointed method in which some of the scenes play out is more confusing than entertaining. 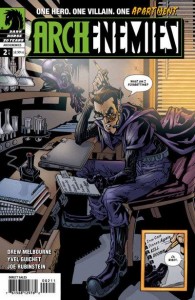 As an idea, roommates turning out to be their own arch enemies, is inventive and I only wish the story had been pulled off better.  But, that’s not to say there aren’t reasons to pick up the story.

Both characters display depth and an ability to grow into something greater than we as the reader will ever see.  The story is left very open-ended with both Vincent and Ethan appearing to “turn over a new leaf” both in their personal and professional lives.  I would have been interested to see where another writer could have picked up and ran with the premise and see what else these characters could give us.  But, alas, it was not to be.

I was not overly impressed with several aspects of the story and the art didn’t blow me away.  It had moments of interest, though often balanced with cheap sexually charged humor that detracted from the character’s value, and had potential which it unfortunately never reached.  I would give Arch Enemies a grade of C-.  Not something I would recommend.