Welcome to another installment of Bin Fodder, a weekly review of comic books both new and old.  Today I am reviewing First Thunder written by Judd Winick with artist Joshua Middleton produced for DC Comics. 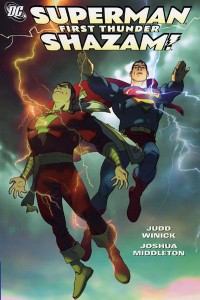 Each writer tries to put their own stamp on a character, even when someone steps in to writer epic characters like Superman, Batman, The Avengers or X-Men they feel almost compelled to mess with the status quo.  Winick does this in subtle ways with First Thunder focusing more on how real life can infringe on a superhero’s life.

In this story we see a new-to-the-game Captain Marvel (Billy Batson) still adjusting to the role bestowed upon him by the great wizard Shazam.  Billy, still a boy, is living on the streets with other homeless being visited regularly by his best friend who is also an orphan but whom lives with foster parents.

As we see Captain Marvel taking on criminals there is still wonderment and very much a childlike excitement that being a hero invokes in Billy.  Superman, the other star of this story, is relatively new on the scene as well and the two become friends during this time. 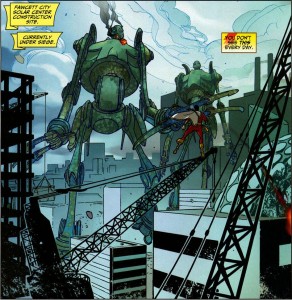 Superman and Captain Marvel are a natural team-up.  Superman, the mightiest man on Earth has one glaring weakness: magic.  Captain Marvel draws his strength from the magical realm (other notable team-ups: Zatanna).  Both characters are still learning about their abilities but more importantly their weaknesses.

During a battle Superman finds himself incased by a beam of energy that crystallized around his head but which has no affect on Captain Marvel whatsoever.  Superman seems impressed by this upstart hero; not something you would see from the grizzled veteran of the JLA much these days. 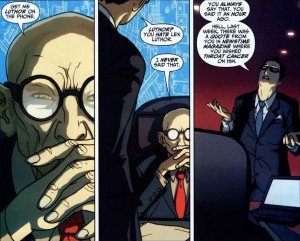 The antagonist in this tale is Dr. Sivana.  He wants to run Fawcett City and the only thing standing in his way is Captain Marvel.  Though it pains him to do so, Sivana reaches out to Lex Luthor to see how he has dealt with his own super-powered pest.  Though it seems only natural due to their insane nature and egomaniacal ways, I was surprised and intrigued at the way Winick portrays this relationship.

This story is full of subplots, character growth, loss, heroism, sorrow and action.  Superman and Captain Marvel are two of the most powerful, most influential and most polarizing characters in the DCU and to see them as newbies is fun and often times wry. 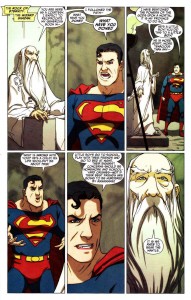 Winnick gets to the meat of it rather quickly but continues with solid pacing.  He doesn’t try to go outside of himself to grab the attention of the reader.  Too often writers feel compelled to continually bring in ancillary characters to move the story along rather than allowing it to flow naturally; Winick does none of that.  Middleton’s art is solid.  He does a lot with shading which can be dramatic in the right places and somewhat comical in others.  But his character designs are spot on and his use of color and backgrounds are impressive.

First Thunder is well worth picking up.  It’s a four-part mini-series which is easily found in trade form for a reasonable price.