In this, the second episode of the eighth season, American Dad picks up right where it left off in the humor department. The entire Smith family (sans Klaus) goes on vacation, and Jeff, Hailey, and Francine have their own hopes as to what this vacation will mean to them. Francine is hoping to spend time with Stan, who has been working non-stop. Jeff and Hailey are hoping to spark their fading sex life, and Roger, in one of his many characters (he’s playing an elderly widow), is hoping to heal from the loss of his husband, Omar. The only one that is left out is Steve.

At the airport, it is made clear to Steve that he is going to be spending his time on the island with Roger, but upon arrival on the island, that all changes. When the family arrives, Francine and Stan begin spending their time together. Stan is getting called constantly by Bullock from the CIA office, and Francine gets upset that Stan is trying to work on their vacation.

Jeff and Hailey’s hopes of reinvigorating their sex life are dashed when they realize that “vacation sex” isn’t what they thought it would be. Steve is on his own adventure, being coaxed into doing some insane things by a British boy he meets on the island all in the name of reaching a nude beach. Roger, still in disguise, meets a new man and is subsequently dumped by him for a younger woman. 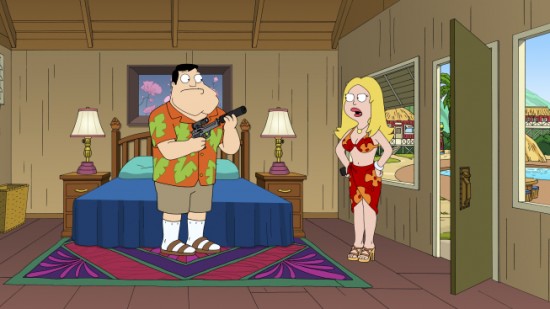 Stan finally speaks with Bullock and is told that the camp’s outdoor activities director is actually a war criminal that has been on the run for years. Stan’s mission is to kill this war criminal. Francine eventually finds out about Stan’s mission and volunteers to help him kill his target. Jeff and Hailey meet a couple who swings and is convinced by the couple that swinging will save their marriage.

The climax of the show involves the war criminal being killed by the gardener, Roger getting his revenge on the man who dumped him via George Hamilton and a colostomy bag, Jeff and Hailey’s sex life in full swing, and Steve finally reaching the nude beach, only to find his sister, brother-in-law, and parents naked. Poor, poor Steve (and his hot dog).

Once again, American Dad has outperformed every animated show on Fox’s Animation Domination block (equaling Bob’s Burgers). This week’s episode was very solid, had a great plot, and was complex but far from being pure nonsense. The writers are really firing on all cylinders, and American Dad is by far the funniest of Seth MacFarlane’s offerings. There were several gags that were absolutely hilarious, and this time the humor was distributed well throughout the entire cast. In closing, after watching this episode, I will never look at mayonnaise the same way again.

I’m a lifelong comic book fan. Comics pulled me in at an early age, with influences ranging from Chris Claremont’s historic X-Men run, Walt Simonson’s Thor run, Mike Zeck’s run on The Punisher limited series, Jim Lee’s X-Men, the early 90’s X-Men animated series, and the best cartoon ever made, Batman: The Animated Series. As a kid, these comics and cartoons gave me a new world to go to when the real world wasn’t so nice. Because of this, comic books will always have a special place in my heart. I love everything about comics, and still get the same feeling reading them today as I did when I was a kid. My major in college was psychology, so I love to incorporate that into comics.
View all posts by Steven Brewer →
Tagged  American Dad, animation, Animation Domination, fox, Roger, Stan Smith.
Bookmark the permalink.