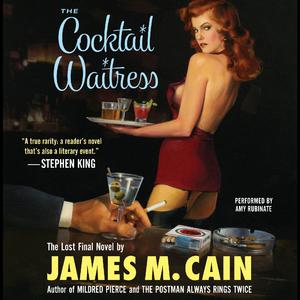 If you have ever heard of Mildred Pierce or The Postman Always Rings Twice, then you already know James Cain.  Cain is known for his ability to skirt the line between lust, greed, desire, and murder in his writings and “The Cocktail Waitress” follows suite nicely.  “The Cocktail Waitress” is James M. Cain’s last and “lost” novel.  The book itself was put together with notes and manuscript pieces from around the world that Cain wrote at the end of his 85 years on this earth by editor Charles Ardai.

The finding and reconstruction of this story is contained in the afterword of the book and reads quite like a detective story all on it’s own.  Ardai talks about spending 9 years searching everywhere for the notes and manuscripts that he used to create the final draft of the book.  Here is a synopsis of the story itself:

Following her husband’s death in a suspicious car accident, beautiful young widow Joan Medford is forced to take a job serving drinks in a cocktail lounge to make ends meet and to have a chance of regaining custody of her young son. At the job she encounters two men who take an interest in her, a handsome young schemer who makes her blood race and a wealthy but unwell older man who rewards her for her attentions with a $50,000 tip and an unconventional offer of marriage…

The story is told from the viewpoint of Joan as she is being taped for a statement.  I enjoyed the first person narrative that  the book was written in and the characters were believable and deep.  The only gripe I have about the book is that there are times that it seems that the story gets off track just a bit.  It seems as if the author doesn’t know what to say next or forgets for a paragraph or so what the character is supposed to sound like.  Other than that, you can feel James M. Cain all over this story and that by itself is always worth a read.  If you like the other Hard Case Crime books that I have reviewed here, go and pickup “The Cocktail Waitress” and enjoy James M. Cain’s “lost” last novel.

You can buy “The Cocktail Waitress” here on Amazon.com

“The Cocktail Waitress” was compliments of Titan Books.