Continuing my review of the DC Comics series Hero written by Will Pfeifer the storied become even more intense.  After the device, which seems to have very similar abandonment issues to the “One Ring”, slips away from the girls it winds up in the lands of another unlikely character. 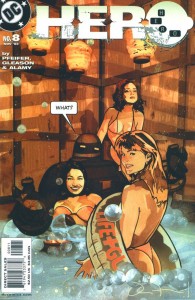 A group of twenty-something shiftless lay abouts decide to use the newfound toy for personal gain.  They create a character, “Captain Chaos” and film the various heroes the members of the group turn in to doing “super-hero” stuff.

It’s an interesting way to write a story arc; as a story that takes a look at what common folk would do when presented with the opportunity to exude immense power and ability, this arc explores the greedier and seedier side of Hero.

What starts to grow in these two stories is the sub-plot brewing just beneath the surface.  There is a man in prison who clearly possesses powers and is monitoring the movement of the device.  We don’t learn much about him but we do come to realize that he wants the device and not to right some wrong that befell him. 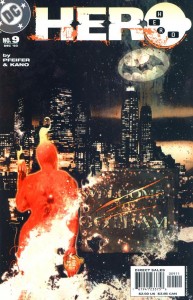 The second story in this sequence brings us to our second interaction with other DC continuity (the first arc involved a Superman sighting); where the character steals the HERO device from a shyster who tricked the Captain Chaos boys into giving it to him in a movie deal and makes his way to Gotham City.

Tony Finch, a one-time small-time criminal in the Joker’s organization was devastatingly humiliated by the clown and fled Gotham in shame.  His return, though less-than-triumphant does include new powers and a desire to be the greatest villain Gotham has ever known.

As Tony recruits a small group of minions to aid in his heists there are forces at work against him.  A local bar maiden whom Finch initially turned to for help suspects he is hiding something and aims to take advantage of that in some way.

The noir feel of this story truly shows Pfeifer’s range as a writer and Kano’s ability as an artist.  The contrasting darkness of this arc to the earlier story involving three pre-teens hanging out at the middle school is outstanding. 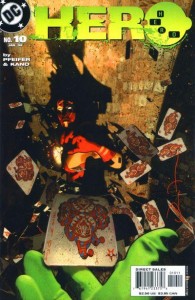 Finch’s story ends predictably with failure, incarceration and loss of the device.  But, unlike in all previous accounts the whereabouts of the device at the end of this story are unknown.  The transference to the next HERO is not seen…not yet at least.