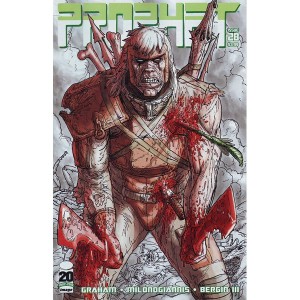 I’ll be straight up and honest with you. This is my first exposure to Prophet in a very, very long time. I’m talking years, like Stephen Platt, Prophet years, so I was pretty much jumping on board to a whole new character and book.

Seems like this issue has me jumping in the middle of a journey to find different parts of Diehard’s body (whom I remember from Youngblood fame). Prophet and his old friend, Hiyonhoiagn, are in the starship with Diehard leading them to pieces of his body so they can complete his assembly. 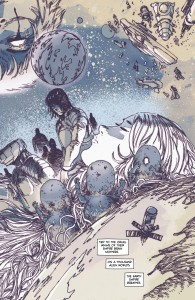 Giannis Milonagiannis’ art takes a little while to grow on you, but as the book progresses, it gets more and more inviting and beautiful. The double page spread on page five is stunning. Brandon Graham does an excellent job of keeping the story accessible, while not watering it down to the point of boring the readers that have been around since issue one. The different creatures and worlds they encounter in this issue alone are so creative and interesting that they draw you into the issue.

I cannot tell you how much this issue pulled me in, as I was skeptical at the outset of reading it. I’ll tell you, I’m definitely on board now and will be picking up Prophet to see how Graham’s story progresses.

I’m a lifelong comic book fan. Comics pulled me in at an early age, with influences ranging from Chris Claremont’s historic X-Men run, Walt Simonson’s Thor run, Mike Zeck’s run on The Punisher limited series, Jim Lee’s X-Men, the early 90’s X-Men animated series, and the best cartoon ever made, Batman: The Animated Series. As a kid, these comics and cartoons gave me a new world to go to when the real world wasn’t so nice. Because of this, comic books will always have a special place in my heart. I love everything about comics, and still get the same feeling reading them today as I did when I was a kid. My major in college was psychology, so I love to incorporate that into comics.
View all posts by Steven Brewer →
Tagged  comic review, comics, Image, Image Comics, Prophet.
Bookmark the permalink.