Geeks on Sports previewer Tim Blacksmith here today to tell you all about Gymnastics Rhythmic & Trampoline, I can’t even believe these are Olympic sports.

Of all the events that exist at the London Olympic Games, Rhythmic and Trampoline gymnastics are among those I think are just silly.  I mean, seriously: I like trampoline’s as much as the next guy and I fancy myself a decent trampoline jumper (maybe not as good as these guys) but that doesn’t make me an Olympian. 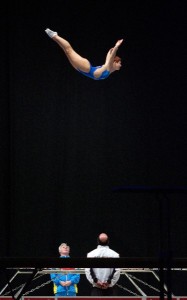 Rhythmic gymnastics synchronized swimming…except that there’s usually just one of them and they’re on dry land, but the sentiment is the same: dance around, look pretty, do something “interesting” and get a medal for it.

I applaud the skill, in this case, because they move their bodies and flex in ways I never could (unlike those ridiculous trampoliners) but balancing yourself on your nose whilst flinging a hula-hoop around your ankle should not be something considered medal worthy…it’s circus worthy.

Similar to synchronized swimming I won’t be spending much time watching these events.  I’ll check in on trampoline because there’s always the hope they’ll take a wrong trajectory and fly off…one can only hope!

I hope you have enjoyed this preview of the 2012 London Olympics Gymnastics events.  Continue to check 8DaysAGeek for more previews of Olympic events.