Geeks on Sports previewer Tim Blacksmith here today to tell you all about –Athletics, which is a rather vague name for an event.  But it’s designed to be all-encompassing of the events that occur in the Olympics of an athletic nature.  Some would argue that all sports are athletic in nature…but those people have never watched bowling, clearly. 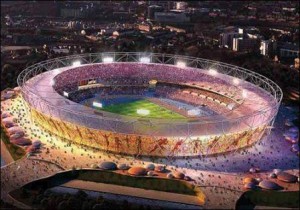 With so many sports involved it’s hard to cover them all in detail.  Thus, I’ve arbitrarily decided on certain events to talk about. 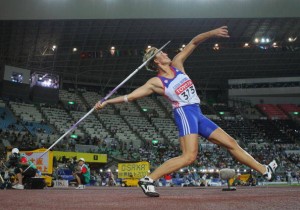 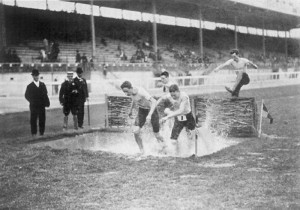 The Evils of Steeplechase

Continuing: 3000m Steeplechase which is normally a sport involving horses, not people.  In this event men and women run around the track, occasionally having to jump over a hurdle, on the other side of which is a giant puddle of water.  The goal here seems to be: how far can we make people run with wet feet?  Can you imagine the athlete’s foot these people get? Oh, right…no, you can’t (wrong audience…).

Finally, we come to the Pole Vault.  Here competitors are handed a flexible pole and told, “go, run down this path, stick that pole in a tiny crevice and use it to push yourself over that bar dangling many, many feet of the ground.”  Oh, and you’re not allowed to touch the bar.  THAT’S INSANE!  Maybe it’s my irrational fear of heights coming out here but…seriously…insane.

Athletics is the crown jewel of almost every Olympic Games.  The 100m Sprint regularly sets records for fastest man alive (sadly, the Flash was banned from competition after the 1980 games) and people, for some reason, love the idea of athletes running around a track carrying a small metal tube in order to hand it off to another person who will run around the same track.  On that note, if you drop the tube you’re disqualified which just seems overly harsh.

I hope you have enjoyed this preview of the 2012 London Olympics Athletics event.  Continue to check 8DaysAGeek for more previews of Olympic events.

For more details on the individual sports, check out my blog.