Geek Out On Star Trek with Ray 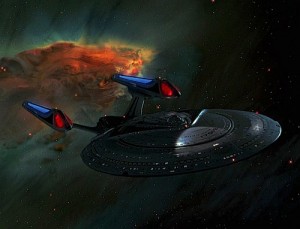 “To boldly go where no one has gone before…”

It has been far too long since those words have been uttered through the speakers of a television. With a family crowded around it, waiting in hushed anticipation of what new worlds and which new civilizations they would encounter in the subsequent hour of broadcast. Words that have as much meaning to a Star Trek fan as “A long time ago…” do to the average Star Wars fan. Words that still resonate with those fans and generate a sense of child-like wonder and a kind of sad nostalgia at the same time. It has been just over seven years since the last “new” episode of a Star Trek series aired for viewers, ending a decades-spanning run of the various Captains and their crews. I would like to take a few minutes to discuss why I think the time is right for us to return to the bridge of a new ship for a new (or should I say the next) generation’s trek to the stars. 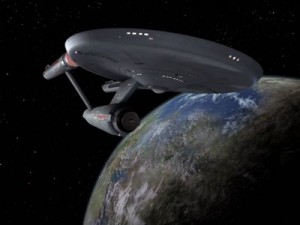 While popularity for Star Trek has never really seen a decline within the ranks and files of its faithful and sometimes borderline obsessively loyal fan base, science fiction in general seems to be on the rise in popularity among a wider range of viewers. Shows like 2004’s Battlestar Galactica (a reimagining of the promptly canceled 1978 series) sparked “water-cooler” talk about a show that’s primary setting was within the corridors of a spaceship among people who, in my experience, scoffed at the very idea of being a fan of something like that. With a four-season run, BSG proved that science-fiction could escape the bonds of preconceptions and draw a much more varied viewership. Before that, of course, there was Firefly, but I feel that is a topic of an entirely separate article. During, and after, BSG’s run, we’ve seen shows like Warehouse 13 and Fringe, Eureka and Falling Skies pop up and grow in popularity. Yes, some of these shows are ending (or have ended) long runs, but these aren’t due to cancellation but, instead are due to the producers, writers, and actors all feeling it was time to say goodbye. That fact alone is something I feel is strong proof that science fiction has its place in television. If you need further proof I should simply ask this, how many of you know what a Sonic Screwdriver is? The bottom line is good stories beget good television and science fiction is a breeding ground for good stories, with Star Trek boasting five series with a total of twenty-eight seasons and ten movies between them all. That doesn’t even include J. J. Abrams’ 2009 reboot film, which brings me to my next point. When Abrams’ reimagining of the Star Trek mythos hit theaters, it grossed over half its estimated budget which proved that a whole new generation of fans were ready to experience a new Trek; even if this one happened to star an “old” crew.

Now, I make no claims at being a tech-geek by any stretch. I can learn the basics of most software with only a little exposure, and I’ve gotten rather proficient with Photoshop over the last decade. However, I have no real knowledge of what it takes to animate computer-generated starships, or mask out an actor from a green screen and drop an expertly-rendered alien planet behind him/her. What I can tell you is that the technology used to do these wonderful acts of “movie magic” are light years beyond what they were even just a few years ago. Now any handful of kids with a little money to burn and a weekend to themselves can make a fairly decent science fiction movie or web series. While I know there are things beyond my casual knowledge that balloon the production costs of a show like a new Star Trek, it seems as though that cost could be brought down to a manageable sum if the right story were written around a budget. One doesn’t need to make every single asset aside from the actors (and, in some potential shows, even the actors themselves) completely digital. It has always been my opinion that practical special effects for things like aliens and ship interiors make the world you’re crafting that much more believable. It has also been a long-standing tradition within the Trek franchise to build a single set and repurpose it throughout the life of the show. Take that tried and true method and build a story around it and you could easily make a show worth watching that would draw viewers week after week with less cost than the billions one would spend on “Lucas-ifying” every single frame of footage. Several shows have done this and, while several were still expensive (or just plain poorly scheduled), these shows had avid fans because the sets became characters themselves. What better universe for making a ship a character, than Star Trek? There are fans that are already loyal to the different ships. In fact, how many of you have had debates over whichEnterprise was superior and why? A bit of good writing and you wouldn’t ever need to leave the ship more than the one or two times a season where it would be integral to driving the plot forward. I have some ideas on this, but we’ll get to that in a minute. 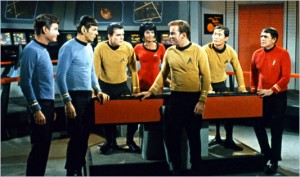 Star Trek has forever been more than its ships and Captains; more than the new worlds and alien civilizations. Arguably the show’s single best asset was its use as a social commentary. The Original Series stands above the others in this aspect, and there are several articles written by people much better suited to dissect its impact on the times and its everlasting appeal. My goal isn’t to examine the forward-thinking messages of the previous series, but to point out that the state of our current society is ripe for the picking for a team of writers to put together a new, deeper Trek. Perhaps the best way to do this would be to use a new Trek to examine the inevitable fragility of a utopian existence; the end of an everlasting peace. With the exceptions of a few single episode arcs, like the case of Deep Space Nine’s Dominion Wars, there weren’t any Star Trek series that focused on all out war. For the most part, they all veered away from violence and how it is easily achieved through the determination of those who would rather give their lives than take another’s. But the cold hard fact is that there is always going to be evil in the world and perhaps it’s time a Trek examined how the complacency of a peaceful society can be manipulated by the actions of those who revel in the tearing down of establishments. Put a new crew right in the center of an inevitable, hard-fought war and spin a show around the choices commanders have to make not only for the safety of their soldiers, but for the sake of those who are just trying to make a living in a world that suddenly isn’t the same one they grew up in. Show the kinds of damage, both physical and emotional, the consequences of those choices can have on the commanders that give those orders, and the soldiers that follow them. 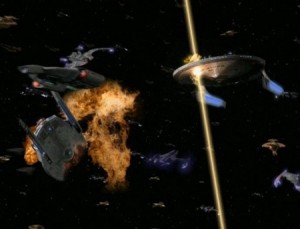 Use the anonymity of an unknown alien race to showcase the reality that not everyone born behind the lines drawn in the sand share the beliefs or hatred of those that drew that line. One idea would be to put a Captain and his crew at odds with the orders they’re given and have them decide to go “rogue.” Perhaps spending the first few seasons on the run from both sides of the war but unfalteringly committed to uphold the fading ideals of their once-glorious Federation. As an added bonus, this would grant the producers an excuse to set the majority of the show within the ship itself, with occasional necessary supply-gathering away missions. A lot of drama can come out of a group of people being forced to live in conditions their surroundings weren’t originally intended for; Syfy’s Battlestar was a perfect example of this and I believe a new Trek series would do well to learn from the examples of those that have survived in the shadow of the franchise’s legacy.

Any way I look at it, I firmly believe the world is ready for a new Star Trek series. Say what you will about budgets, or market value, the fact will always remain that what an audience craves is a good story. A rich, fantastical world they can escape to, populated by characters with personalities and personal demons they can relate to. We’ve had one too many Sookies and far too many shallow couples start a relationship that will likely last just under that amount of time it takes the credits to roll. Bring back epic stories that span multiple seasons. Bring back the thrill of getting to know an ensemble cast and watching them grow together, or apart, over a few years. Bring back amazing ships and planets populated by wondrous, and often scary, new alien species. Bring back a show an aging geek can sit down and experience with brand new wide-eyed wonder through the eyes of his child.