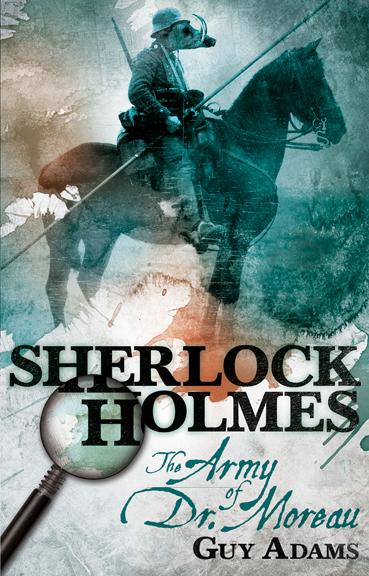 I like to consider myself fairly versed when it comes to the character of Sherlock Holmes.  I’ve read every Conan Doyle story ever written.  I’ve watched some of the classic Basil Rathbone incarnation, both of the recent Hollywood blockbuster movies, BBC’s great reimagining simply called Sherlock, and even sat through the Asylum’s “mockbuster” Sir Arthur Conan Doyle’s Sherlock Holmes.  I DO NOT recommend that one…or any Asylum production for that matter.

So when I was given Guy Adams’ novel, Sherlock Holmes: The Army of Dr. Moreau, my initial reaction was not one of great confidence.  Could someone write a story not only featuring Conan Doyle’s quintessential characters but incorporate elements from one of H.G. Wells’ most famous works while doing justice to such classic literary characters?  In my opinion, Mr. Adams did just that.  Here is a quick synopsis of the book…

Dead bodies are found on the streets of London with wounds that can only be explained as the work of ferocious creatures not native to the city.

Sherlock Holmes is visited by his brother, Mycroft, who is only too aware that the bodies are the calling card of Dr Moreau, a vivisectionist who was working for the British Government, following in the footsteps of Charles Darwin, before his experiments attracted negative attention and the work was halted. Mycroft believes that Moreau’s experiments continue and he charges his brother with tracking the rogue scientist down before matters escalate any further.

Holmes finds himself doing something in this story that he rarely ever does.  He must work with a team.  Mycroft has assembled a think tank to assist his brother in cracking this grisly case.  The group consists of characters from other classic works of fiction; such as Doyle’s The Lost World, Jules Verne’s Journey to the Center of the Earth, Edgar Rice Burroughs’ At the Earth’s Core, as well as H.G. Wells’ The First Men in the Moon. Despite the pedigree that these characters bring to the table, Holmes treats them just like he would anyone else; namely with apathy bordering on disdain.

If I were pressed to find something to criticize with Adams’ portrayal of all these characters it would be with that of Holmes’ brother Mycroft.  I will admit that I’m being a bit of a Doyle purist or even a Holmes-ian snob when saying that I believe Mycroft may not have beenrepresented with the gravitas that I felt he deserved.  In Doyle’s stories Mycroft is portrayed and even described by Holmes as the more intelligent of the two brothers.  Only ever seeking out his brother’s help when the case required a vast intellect, yet was either beneath him to solve on his own or required someone not connected to the British government.  Adams’ Mycroft seemed to legitimately require the assistance of his brother to solve this mystery.  Which is something I’m not sure Doyle’s version of the character would ever admit to.  Again though, I’m being hypercritical in this examination.

To bring this review to a close, let me say that I thoroughly enjoyed this book.  The areas where the narration changes and we are treated to the different perspectives of this menagerie of characters were particularly enjoyable.  I am hopeful Mr. Adams will write more stories involving the intrepid detective and if that is the case he can count on there being a copy added to this geek’s collection.

Sherlock Holmes: The Army of Dr. Moreau was courtesy of Titan Books

Buy this book on Amazon.com