I wanted to do something a little bit different for this week’s app review. If you are a comic book aficionado, you have without a doubt heard of, or participated in, this age old debate: DC or Marvel?

Which one is better? Or are they equal? 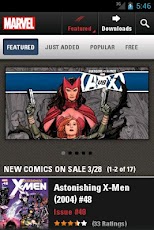 The big two have been locked in this struggle for years, and the top spot has been passed between the two of them for just as long. I understand that the comic world does not revolve around the big two, and agree that there are many smaller publishers that have content that, at times, far surpasses what the big two put out (Image Comics, Dark Horse). But for the sake of this article, I chose DC and Marvel. I’m going to compare the digital comic apps that both have to offer, and see which one comes out on top.

The similarities are easily identified. They both have the ability to browse specific pages, the layout of the pages are the same (landscape or portrait mode), and the home screens and download screens are laid out in a similar fashion.

They both also share a similar annoyance. You have to download each comic again on every device you own. I downloaded my comics on my Galaxy Tab 10.1 initially, and then had to download them again when I signed in on my Galaxy S3. This is annoying because nowadays you would expect to have your comics available on any device once you log into your account, but I guess that isn’t the case with both of these apps.

The biggest differences lie in detail and functionality. The Marvel Comics app just seems more polished and well put together, like the app developers wanted to make every aspect of using it a great experience. The beauty of the Marvel app makes the DC app look hastily put together, like something just to get them by and get the app out there. Another difference is in the way you read the comic. Once again, the Marvel app surpasses DC’s offering, providing a more fluid, less clunky experience. Plain and simple, it just seems a lot less frustrating to read a digital comic correctly in the Marvel app. This is bothersome because reading a digital comic is what these apps are all about, so one would think that DC would strive to make this a more pleasing experience.

Despite the faults, DC has put out a solid app, laying a promising foundation to build upon. The Marvel app, however, simply outperforms the DC app in nearly every category. They both have some similar attributes and annoyances, but Marvel’s shortfalls do not affect the ability to enjoy reading a digital comic. Because of this, I give the nod to the Marvel Comics app. 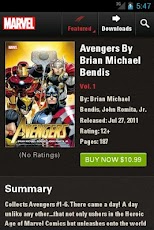 I’m a lifelong comic book fan. Comics pulled me in at an early age, with influences ranging from Chris Claremont’s historic X-Men run, Walt Simonson’s Thor run, Mike Zeck’s run on The Punisher limited series, Jim Lee’s X-Men, the early 90’s X-Men animated series, and the best cartoon ever made, Batman: The Animated Series. As a kid, these comics and cartoons gave me a new world to go to when the real world wasn’t so nice. Because of this, comic books will always have a special place in my heart. I love everything about comics, and still get the same feeling reading them today as I did when I was a kid. My major in college was psychology, so I love to incorporate that into comics.
View all posts by Steven Brewer →
Tagged  comics, DC Comics, digital, Digital Comics, Marvel Comics.
Bookmark the permalink.