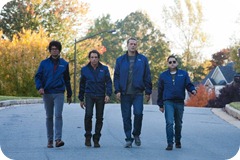 All together, these guys make The Neighborhood Watch. Their goal: Find the murderer of Evan’s friend, because the police are useless.  Will Forte and Mel Rodriguez, who was Migo in Running Wilde if you watched that, are the only two cops you see working in that town and they do absolutely nothing–and are hilarious doing it.

The story is pretty basic, with a couple of small twists. (I love how they have to kill the aliens.)  Mysterious murder begets The Neighborhood Watch, a rag tag team of four very different guys bond over beer, aliens, arguments, and guns, and then they get to save the day!

At its heart, this movie is all about character interactions and personal growth. Then there’s the humor, which is pretty solid for most of the movie, but a few times it verges on being awkward. And it involves a lot of semen/penis jokes. But we like those a lot, right? It also pays homage to a certain song to a movie I cannot stand. 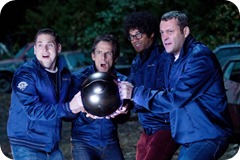 While The Watch won’t win prestigious awards, or break any records, it’s a really funny summer comedy. I love Richard Ayoade, he can do no wrong. His quirky character really made the movie for me, and then there’s the interactions between Stiller and Vaughn. These two play well together, and balance each other’s extreme character types out. And yes, I liked Jonah Hill’s slightly unstable Franklin too.

Over all, I’d give this a solid 7/10. If you’re in the mood to see a comedy at the theatre, this is a good contender. And if you don’t know who Richard Ayoade is, educate yourself and see him in this movie so he knows he is welcome in American productions. We would all benefit from it. I swear.