Reboot. As comic book fans, we know all too well the meaning of that word. But up until recently, as in the past six or seven years, Hollywood has seemed to place a tight grip around the neck of the reboot. Sony was originally planning Spider-Man 4, with Tobey and Kirsten coming back and introducing John Malkovich as the Vulture. Then, out of nowhere, Sony pulled the plug and decided to reboot the franchise. There’s that ugly word again. Questions were abundant when it came to the new film. How will Andrew Garfield do? Is that really his costume? Do you think Emma Stone would ever go out with me? Ok, that last question was mine.

But seriously, this movie had a lot to live up to and many were wondering if it would be good. Face it, we all love Spidey, so there was a lot riding on this film. Well The Amazing Spider-Man is good. Marc Webb has crafted a touching, emotional film. If you’ve seen any of his other films, you know Webb is very good at this. You really feel for every character in this film. The film uses every character well; they all have something substantial to contribute. Best of all, the film doesn’t stomp all over the Spider-Man mythos. Andrew Garfield played a great Peter Parker, and an even better Spider-Man. I absolutely loved Martin Sheen and Sally Field as Uncle Ben and Aunt May. Emma Stone? Let’s just say YOU will fall in love with Gwen Stacy. The character work makes this film. The action scenes are great, but they are just icing on the cake. This film oozes emotion. The only bad thing about this film is the villain. The fact that they missed the mark on The Lizard is frustrating. 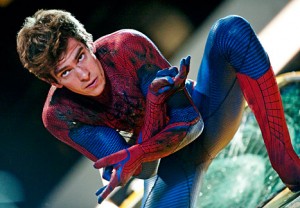 The opportunity was there for a truly frightening villain. Instead, they put Barry Bonds in a Goomba Trooper costume from the Super Mario Bros movie. Yes it’s that bad. Anytime you use a Mario Bros movie reference, it’s bad. Ryhs Ifans was a great Curt Connors, but the film missed the mark with The Lizard. The CG was bad in the Lizard scenes, and that truly hurt the film. Overall, this film was one step away from walking into epic territory. If the character development wasn’t so damn good, this film would have been another Green Lantern. This film had a great director, superb acting and cast, great pace, and a poor villain. A truly frightening Lizard and this film would have been a 10/10, instead, I give Amazing Spider-Man a 7/10.

I’m a lifelong comic book fan. Comics pulled me in at an early age, with influences ranging from Chris Claremont’s historic X-Men run, Walt Simonson’s Thor run, Mike Zeck’s run on The Punisher limited series, Jim Lee’s X-Men, the early 90’s X-Men animated series, and the best cartoon ever made, Batman: The Animated Series. As a kid, these comics and cartoons gave me a new world to go to when the real world wasn’t so nice. Because of this, comic books will always have a special place in my heart. I love everything about comics, and still get the same feeling reading them today as I did when I was a kid. My major in college was psychology, so I love to incorporate that into comics.
View all posts by Steven Brewer →
Tagged  Amazing Spider-Man, comics, marvel, movie, review, Sony, Spider-man.
Bookmark the permalink.