Well it seems as though the barely released Samsung Galaxy S3, touted as the best Android phone currently available on the market, has exploded. No joke. It has literally caught fire and exploded. Making the rounds today are images of the charred super phone, posted by the owner of the phone. He said, “a white flame, sparks, and a bang came out of the phone…the phone burned from the inside out.” He went on to say that the phone burned through the plastic AND through the case to his phone. This explosion happened while the phone was sitting in the phone holder in his car. Samsung immediately issued a statement saying that they are aware of the matter and are awaiting the arrival of the “specific product in question” to conduct a thorough investigation. This incident raises the question, is this the reason behind the delay in releasing the phone that Sprint, AT&T, and T-Mobile customers are experiencing? Is this the reason behind Verizon being the latest to the S3 release party? Ever since it was reported that US release dates were being pushed back, there has been a sense of not getting the full story behind the delays. Now we find a possible reason why. I don’t know about you, but the prospect of this phone possibly turning me into the real life Harvey Dent/Two-Face has made me a very cautious early adopter. 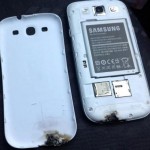 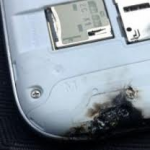 I’m a lifelong comic book fan. Comics pulled me in at an early age, with influences ranging from Chris Claremont’s historic X-Men run, Walt Simonson’s Thor run, Mike Zeck’s run on The Punisher limited series, Jim Lee’s X-Men, the early 90’s X-Men animated series, and the best cartoon ever made, Batman: The Animated Series. As a kid, these comics and cartoons gave me a new world to go to when the real world wasn’t so nice. Because of this, comic books will always have a special place in my heart. I love everything about comics, and still get the same feeling reading them today as I did when I was a kid. My major in college was psychology, so I love to incorporate that into comics.
View all posts by Steven Brewer →
Tagged  android, comics, DC, DC Comics, exploding, galaxy s 3, Harvey Dent, samsung, Two-Face.
Bookmark the permalink.